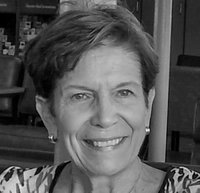 Joan graduated from St. Gabriel High School, New Rochelle, NY in 1956 and the College of New Rochelle, NY, in 1960. In 1963 she married Gerald P. Shea. After living in several places in the U.S. and Warsaw, Poland, she and her first husband settled in Westport, CT, where they raised their family and where Joan taught elementary school for twenty-five years, during which time she received a Masters’ Degree in Reading from the University of Bridgeport, CT.

They moved to Hilton Head in 2000 to spend their golden years enjoying golf, beautiful weather and new friends. Joan was preceded in death by her husband, Gerald, in 2005, and in 2012 Joan married G.  Daniel Zally.

Joan was an active member of Long Cove Club, serving in two garden clubs through the years, and as a long-time member of the social committee of the Yacht Club. She also enjoyed being active in the Book Club, the Rosary group, playing couples’ bridge with her husband and ladies’ bridge with her friends. Outside of her home community, Joan was a member of St. Francis By the Sea Catholic Church both as a Eucharistic Minister and a member of The Women of St. Francis. She also volunteered at Back Pack Buddies and, with her husband, Dan, was a greeter for Operation R & R. She was a member of the Hilton Head Orchestra League for many years, volunteering at the annual Piano Competitions, and at the Concourse d’ Elegance in its formative years.

Besides her first husband, she was preceded in death by her brother, William Bergener, cousin Peter Bowe, and brothers-in-law, Bill Shea and Tom Shea.

A Mass of Christian Burial will be held Saturday, June 29 at 12:30 pm at St. Francis by the Sea Catholic Church.

In lieu of flowers, donations can be made in Joan’s name to Hospice Care of the LowCountry, www.hospicecarelc.org, the American Cancer Society, http://www.cancer.org  or the charity of your choice.