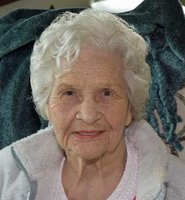 Grace was born on October 27, 1925 in Scranton, Pennsylvania to Fred Dimler and Mary Prendergast. As a young girl she moved to her grandparents’ house in Reading, Pennsylvania where she was raised with her brother George and twelve Prendergast aunts and uncles who were like siblings.  After graduating from Central Catholic High School, Grace entered Nursing School during WWII and received her RN degree in 1945 which coincided with the end of the war. On November 28, 1946, Grace married William H. (Bill) Roth, a Marine who had served in the WWII Pacific Theater.  Grace pursued her nursing career and specialized in neo-natal and NICU care. During this time Grace and Bill raised a family of three in Pennsylvania and then moved to Stafford County, Virginia. Grace continued her nursing career and Bill worked in real estate development. Both served their local community, especially the Aquia Harbour Lions Clubs. After 56 years of marriage, Grace was widowed in 2003. In 2016, Grace relocated to Hilton Head Island, SC and for the past year had been a resident at the Village Cove Assisted Living.

Due to COVID, family members only will celebrate Grace's life with a Mass at St. Francis by the Sea Catholic Church on August 4th. At a future date, Grace will be laid to rest with her husband, William Roth, at Quantico National Cemetery in Virginia.

In lieu of flowers, donations in Grace’s honor may be made to St. Jude’s Children’s Hospital at the following link;