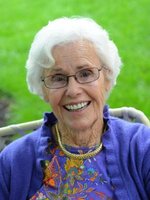 Alice was born April 20, 1927, in Champaign and was the daughter of Florence Ryburn Boulware and Hardin Merwin Boulware. She married William “Bill” Coburn Fox on Sept. 4, 1948.

She was preceded in death by her parents; husband; her daughter, Elizabeth McMahon (Robert) of Ogden; and her sister, Barbara Boulware Camp.

She is survived by her children, Peter B. Fox (Kim) of Chapel Hill, N.C.; Hardin Andrew Fox (Muffy) of Riverside, Conn.; and William Bruce Fox (Jennifer) of Middleton, Wis.; 10 grandchildren; and three great-grandchildren.

Alice graduated from University High School in 1944. She spent a year at Monticello College in Alton before being admitted to Vassar College. While attending Vassar, Alice met her future husband, Bill, on a blind date. She graduated with Vassar’s Class of 1948, and Bill and Alice married the following fall while he attended Harvard Business School. They moved to Washington, D.C., for Bill’s employment after Harvard, and in 1950, Bill and Alice moved to Champaign, where Bill joined the Boulware family business and proceeded to be president and chairman of First National Bank of Champaign.

Alice focused her time on raising her four children. She served for several years as a board member of the Champaign Public Library. Throughout her life, she enjoyed traveling with Bill, playing bridge, golfing, gardening and, most of all, being with her family and grandchildren. Alice was a lifelong learner and enjoyed experiencing new adventures.

After Bill’s retirement, they moved to Hilton Head, S.C., and continued to visit Champaign often to see family and friends.

Donations in her memory may be made to Children’s Program, Champaign Public Library, 200 W. Green St., Champaign, IL 61820 or by going online to https://bit.ly/CPLdonations and selecting "Children's Programs" under "Gift Designation."