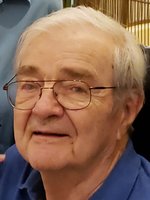 He was the first son of Lewis L. and Marion M. Nettleton of Oakmont, PA, where Dave spent his youth before enrolling at Carnegie Institute of Technology, in Pittsburgh. He graduated in 1951 with his BSEE degree. At Carnegie Tech, he met the love of his life, Nancy Alice Horger of Canton, OH, where they were married on July 28, 1951.

Dave and Nancy moved to Southern New Jersey, where Dave embarked on his career and they raised a family of five children. During this period of his life Dave and Nancy enjoyed time with friends at the Moorestown Field Club and many summers on Long Beach Island with their family.

Dave’s successful career in engineering and business spanned many decades, and he was one of those lucky people who always said he thoroughly enjoyed his work. His professional life began with ten years at RCA, culminating as Chief Engineer of the Data Processing Division. Following his entrepreneurial nature, Dave then embarked on a series of business ventures and independent consulting in the field of data processing and communications theory. He founded and ran Data Communications (1962-66); formed and served as President of Okidata Corporation, a joint venture with Japan’s Oki Electric Company (1972-78); and served as Executive Vice President of NYSE-listed Decision Data Computer Corporation (1984-85). During his career, Dave held more than fifteen patents in the areas of data handling, logic systems, circuits and electro-mechanical devices.

In 1991 Dave and Nancy moved from their longtime family home in Moorestown, NJ to Hilton Head Island, SC, where they enjoyed an active and engaged retirement. Both avid golfers, Dave and Nancy were members of Dolphin Head Country Club. Dave was involved in many community activities and charitable organizations and was especially dedicated in his work as a literacy volunteer. Together with Nancy, he enjoyed adventurous worldwide travel and many summers of family reunions with siblings, children, grandchildren and great grandchildren. Dave had a deep appreciation of art, which led him to develop his own artistic skills, as he became an accomplished painter in oils and pastels. In his professional career and in retirement, he embodied personal qualities and character traits that inspired his children and others who knew him—independence and hard work, ingenuity and technical competence, along with a keen intellectual curiosity.

A favorite plaque on Dave’s desk quipped: “Ve Get Old So Soon Und Yet So Late Schmart.”  Fortunately for all of us, Dave died both old and smart. We will miss him dearly.

A celebration of life will be planned for a later date. In lieu of flowers, memorial donations may be made to The Literacy Center (theliteracycenter.org)