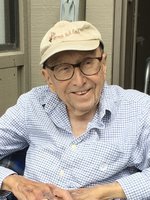 William “Willy” Cizmaric, 96, died on Saturday, July 24th peacefully at his Hilton Head home of over 40 years.  He was born February 8th, 1925, in Bratislava, Czechoslovakia (now Slovakia.)  Son of Alexander and Josefina Cizmaric, he came from a family of chefs and restaurant owners. He was an accomplished competitive river kayaker and loved to play guitar and sing.

After graduation from Hotel and Restaurant School in Bratislava he worked alongside his father in the family restaurant.  Due to the communist take-over of the country, Willy made a daring escape from Czechoslovakia by swimming across the Danube River to get to Vienna, Austria.  From there, he immigrated to the United States where he learned English and worked in several New York City restaurants in the mid 1960’s.

He then moved to Stowe, VT to work at the Trapp Family Lodge where he met his wife, Sally.  Together they moved south to Jasper, GA where they renovated an old hotel into a country restaurant (The Woodbridge Inn). After several years they moved to Hilton Head, SC.

Willy worked in the restaurant business on Hilton Head including the Plantation Club in Sea Pines and as general manager of the Sea Pines Country Club.  During his time at the club, he was well-liked and respected and earned a reputation for a high standard of excellence.

A gourmet chef, he was happiest in the kitchen and kept family and friends well fed.  Few measurements in any of his recipes, just an innate knowledge of what would work and taste delicious.   A devoted nature lover, avid gardener, and skillful fisherman, he loved the beauty of the marsh, walking on the beach and observing wildlife. He had a twinkle in his eye and loved a good laugh.

Willy is survived by his wife Sally of 51 years, children Michael Cizmaric, Elena Cizmaric  and Natalie Ellingsen (Eric) and grandchildren Paige and Mila Ellingsen.  He is also survived by sisters Alice Topoľský and Sona Divisova and nephews Boris and Pavol Topoľský.   A private family memorial will take place on Friday, August 6.   Remembrances may be made to the Hilton Head Island Land Trust or The Deep Well Project.