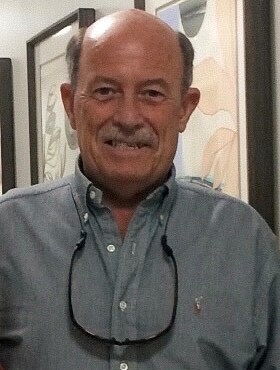 On September 25th, 2021, David Paul Lively, of Hilton Head Island, SC, stepped over the ropes and boarded his zephyr to Heaven to be with his Lord and Savior, and the many people welcoming him at those pearly gates. He was born in Columbus, GA and was 69 years old.

In high school he starting dating Ann Jordan, when he tried to teach her to drive. Regardless of the outcome, the two attended University of Georgia together, and in 1976 she became Ann Jordan Lively. High school sweethearts who shared 53 years together, 45 of which were married. After college, David started a clothing manufacturing business that led him to travel through 48 states and befriending many people. The Lively’s moved from Atlanta to Hilton Head 36 years ago, when he took a job as a Marketing Director for an engineering firm that invented new products. Later he went back into the clothing industry when he started Indigo Textiles. His last career was with Charter One Realty as a sales agent where he gained great joy in helping families find a home. David faithfully served as a deacon with his church family for whom he adored.  His true loves were his family and friends, his faithful companion, Huck and also fried chicken and vanilla ice cream.

He is survived by his wife, Ann Jordan Lively, his son and daughter-in-law Jonathan and Alexa Lively with granddaughter Rowan, and his daughter and son-in-law Kelli and Daniel Shambayati with soon to be grandson Parker David. He was predeceased by his mother Hazel Dean Lively. His surviving family members are his father and stepmother, Paul and Esther Lively, his brother and sister-in-law Wayne and Becky Lively, and his sister and brother-in-law Janet and Mickey Carter.

David had many interests that captivated his time, but few were more important to him than good jokes, boats, the ocean, fishing, friends and family. He collected people, among lots of other random things from speakers to cameras and so forth, but he cherished those moments, laughing with people. He wouldn’t want anyone to be sad, as he is sailing into eternal sunsets, what he always wanted.  He’d prefer you tell a good joke, remember the good times, eat something sweet and make sure you will join him in heaven one day.

We will celebrate this great man at Hilton Head Presbyterian Church on October 11th at 3 pm. There will be a small reception following the service. Bring your stories, your smiles, and your memories to warmly remember him as he is above us. In lieu of flowers please make donations to HHPC, PO Box 23678, HHI, SC 29925.