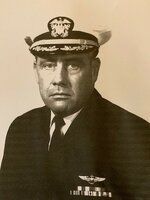 It is with great sadness that we announce the passing of Captain (USN Ret.) Francis Joseph Duffy, 89, of Hilton Head Island on October 17, 2021. Frank was the beloved son of William and Genevieve Duffy of Upper Darby, PA.

Frank attended Malvern Preparatory School in Malvern, PA and played on the varsity football team. He was co-captain of the team his senior year and earned an athletic scholarship to Muhlenberg College in Allentown, PA. Besides academics and football, Frank was a member of Alpha Tau Omega (ATO) fraternity.

Also, while at Muhlenberg College, Frank met the love of his life, Virginia (Ginny) Cruse. During the summer of 1954 Frank courted Ginny, traveling between Ocean City, NJ and Allentown, PA as much as possible. He proposed in the fall of 1954, and they married on July 2, 1955.

A graduate of Muhlenberg College, Frank entered Aviation’s Officers Candidate School and was commissioned a Naval Officer in Newport Rhode Island in 1955. After commissioning Frank reported to Pensacola, Florida to commence flight training, receiving his Wings of Gold on August 18, 1956.  He would then begin training and qualification on the S2 “Tracker” and in March of 1956, he qualified as a carrier aviator. Throughout his naval career, he saw service from Cuban Missile Crisis to the Vietnam War. Selected for command in the fall of 1970, Frank would assume command of VS-31 in March 1971.  As the Commanding Officer he would lead the “Topcatters” while forward deployed to the North Atlantic on board the USS Intrepid (CV-11). Frank retired from the Navy as a Captain in 1979.

Upon his retirement in 1979, Captain Duffy worked for Raytheon Corporation and then Semcor. When Frank and Ginny moved to Hilton Head Island in 1990, he continued to work for Semcor until fully retiring to enjoy life with his beloved and his passion of golf in Hilton Head Island. Frank was a devoted husband and father; he touched many lives of people all over the world and will be dearly missed. In addition to his parents, Frank was preceded in death by sister Genevieve M. Labarge (Howie) and brothers William D. Duffy (Eileen) and Rev. David J. Duffy, OSA. He is survived by his loving wife of 66 years, Virginia; daughter Kimberly Rigsbee and her husband, Chuck; daughter Dianne Custer and her husband, Boo; daughter Catherine King and her husband, Chip; son Michael Duffy and his wife, Karen; along with nine grandchildren, six great grandchildren, and many nieces and nephews.

A Funeral Mass will be held at Holy Family Catholic Church, 24 Pope Ave, Hilton Head Island, SC on November 12, 2021, at 10:30am. Following the Mass, a ceremony with military honors will take place at St. Francis by the Sea Columbarium, 45 Beach City Rd, Hilton Head Island, SC. In lieu of flowers, the family requests that contributions be made to the Wounded Warrior Project, Holy Family Catholic Church, or the American Heart Association.