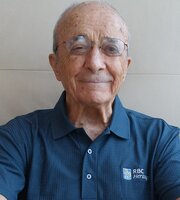 He was born in Wilkes-Barre, Pennsylvania to Fred and Bertha McFadden and was one of their five children. He served in the occupation Army in Japan, and was a proud graduate of Penn State. He worked for the IBM Corporation for 33 years, retiring in 1988, to become the full time gardener extraordinaire at homes in Georgia, Connecticut, Paris France and Hilton Head Island. He loved tennis and skiing, his wife, his four children Maureen McFadden Feibusch, Michelle Eileen McFadden, Sheila Marie McFadden and Michael Keith McFadden, four grandchildren Kelly Ann Feibusch, Myles Vincent McFadden, Sean Michael Feibusch and Luke Robert McFadden, the many dog companions who shared his life, and a good glass of Pinot Gris.

He and Barbara met at IBM, married in 1985 and shared many adventures over their life together.   He was preceded in death by his parents, his brother Fred, sister Rosemary Heinz, and daughter Michelle. He is survived by Barbara, his wife of 36 years, his siblings Donald D. McFadden (Sheila) and Patricia McFadden Bates (Hank), his children Maureen (Richard), Sheila and Michael (Patricia), his four grandchildren, his Mother-in-Law Elinor Belanus and Sister-in-law Betty Belanus Francis (Steven) and many nieces and nephews.

A celebration of his life will be held at a later date. In lieu of flowers, please send donations to the Hilton Head Humane Association  www.hhhumane.org or MUSC Heart Center, giving.musc.edu.