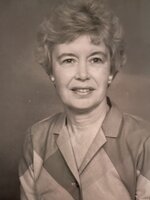 Born January 22, 1936, in Charlotte, NC, Sally was the daughter of Dean Joseph C. Elgin and Marjorie W. Elgin, and she grew up in Princeton, NJ.  She was the sister of Alice E. Bishop (G. Reginald) and Joseph C. Elgin, Jr., (Mary), both of who predeceased her.  She dearly loved her nieces, Anne Faynberg, Charlotta Bishop, Alice Anderson Bishop, and Stacey Van Loozen and her nephew, Scott Elgin.

Sally was a military spouse who was deeply devoted to her God, family, and country. She accompanied Ted, a U.S. Air Force officer, on his duty assignments to Pope Air Force Base, NC; Okinawa, Japan; Norton Air Force Base, CA; and The Pentagon. She and Ted retired to their home on Hilton Head Island in 1993, where Sally remained for the rest of her life.

Sally was a member of St. Luke’s Church on Hilton Head Island for over 29 years, and she volunteered at the church office, Church Mouse Thrift Shop, and altar guild and managed the affairs of the columbarium for several years.  She also belonged to the Order of the Daughters of the King, a women’s ministry of prayer and service, and she served on the Vestry of St. James’ Church in Alexandria, VA, when she and Ted lived in Northern Virginia.  Sally and Ted served together as Certified Poll Managers for Beaufort County, SC. She was also a Fairfax County, VA, substitute elementary school teacher for several years.

A funeral service will be held for Sally at St. Luke’s Church on Friday, July 15, 2022 at 11:00 am.  In lieu of flowers, donations may be sent to Fisher House Foundation, which builds comfort homes where military and veteran families can stay free of charge while a loved one is in the hospital, by visiting  https://fisherhouse.org/.