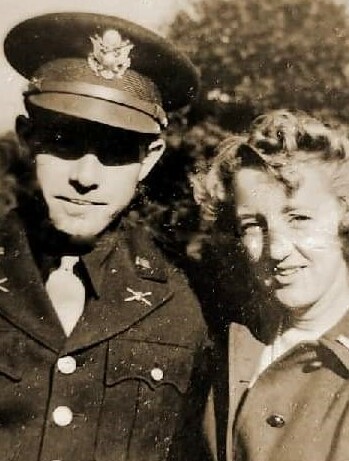 Grandpa Sam, son of Edythe Addison Hibbard (daughter of Harvey and Mary J. Terrier Hibbard and granddaughter of William T/Irish. and Edna M. Hibbard) and Mandas Samuel Mulrain Sr. (son of William and Frances Draper Mulrain) was born and bred in Brooklyn, NY. His sister Edythe (age 3) and Russell, who served bravely in WWII and was killed in France the day before the war ended predeceased Mina and Sam.. Before the war, Sam married the love of his life, a Brooklynite with English/Swedish parents (Magnus and Alice Harding Larson), Mina Larson (deceased 2000), who lived just a few blocks away, on April 22, 1945. Sam and Mina lived in Brooklyn, Long Island, Texas, NYC, Venezuela, Tennessee, and then retired in a new little development called Hilton Head Island in South Carolina. They bought property on Willow Oak Lane, and Sam designed the house in a “U” to accommodate Mina’s green thumb and adjacent greenhouse on the side in front of the forest the house backed up to. Most of all, they loved their sons, Mark and Jeff.

The Early Years Sam was a graduate of Richmond Hill High School in NYC. He loved baseball - the NY Yankees picked Phil “The Scooter” Rizzuto (later Hall of Famer) over Sam the Man. He loved golf – retired at 96 as the oldest worker on HHI, a starter at Palmetto Dunes Country Club for 32 years. He loved golf balls – picked up thousands, washed, then sold them all (along with hundreds of little plantings Mina prepared) at St. Andrews by the Sea Methodist Church’s community events to raise money for their missions. Before the war, he went to Columbia University in NYC.

WWII’s Greatest Generation He loved our country – fought, was wounded during WWII in France by shrapnel in the head, and rehabbed at the chateau with a moat (then owned by a French family, the premier French button makers for Napoleon’s army. The family sent an ivory button to Sam when Mark was born. Bill Gates and buddies bought the chateau after the last family member passed. We just found out he had a metal plate in his head a few months ago – he never talked about the war. Military service began with enlistment in October 1942 as a Commissioned Officer, 2nd Lt., Anti-aircraft Artillery in 1943. He married Mina at Fort Bliss, TX. He was re-assigned to Infantry Retread and sent to France under General Patton’s 3rd Army, 80th Infantry Division (Blue Ridge), 318th Infantry Regiment, 3rd Battalion, and was Platoon Leader/2nd Lt. for “K” Company. He was awarded: Combat Infantry Badge/Wounded in Action – for exemplary conduct in action against the enemy; Purple Heart/Wounded in Action; Bronze Star/Wounded in Action; Bronze Star/For combat with the 318th Infantry Regiment; and Purple Heart/General Orders. He fought in the Rhineland Battle in the Battle of the Bulge. Sam was also assigned to the European Theatre of Gen. Dwight D. Eisenhower post-injury and attended Sorbonne University in Paris, France. After returning home, he worked for American Can Company (41 years) nationally and internationally (Caracas, Venezuela, where Mark and Jeff went to the American School), and then was plant manager in Memphis, where he retired to Hilton Head Island.  He served 31 years of active and reserve duty in the U.S. Army.

Living the Dream Living on Hilton Head Island in the early days was a dream – little traffic, roasted duck at the Hofbraus House. The kids went parasailing off of Harbor Town, into the ocean at the Sea Pines private beach, and played metal soldiers and marbles with Sam’s collection. Christmas was a joy with a roaring fire, a great meal, and pies…always Mina’s pies. Sam was one of the founders/organizers of The Hilton Head Island (South Caroline) War Memorial; organizer and former president of Habitat for Humanity (25 years, plus built the first HH house on the Island); one of the organizers/workers for The Hilton Head Heritage Golf Tournament (a Red Coat, retired in his mid-90s); celebrated as the oldest worker on HHI by the Hilton Head Golf Association (2009 Employee of the Year – and he would only take minimum wage); and chair of many committees at St. Andrews Methodist. After Mina died, Sam set up the Mina Larson and Mandas S. Mulrain Scholarship at the Community Foundation of the Low Country to fund continuing education for a high-school senior student (need-based, overcoming hardship) who has demonstrated extraordinary determination in achieving their goals. For years, Sam and Mina drove to Florida and back up to HHI in his new Cadillac cars to see his kids and grandkids. He loved those Caddies – they were his two-door, low, fast cars.

Low Country and National Legacy In 2009, WTOC honored Sam as a Hometown Hero. He says he likes talking to people - https://www.wtoc.com/story/10971210/hometown-hero-sam-mulrain/. In 2014, the Island Packet interviewed him, one of many interviews – they even did a front page, four-color article entitled “Mighty Mina” – featuring Mina in her glass greenhouse surrounded by her plantings and featuring her volunteer work and the love she had for Sammy. She was always his best friend, his inspiration. Sam kept quotes around – he loved to write and read. In 2018, grandson Jeffry wrote about the inspiration Grandpa Sam gave him for his Harvard University Master’s program. Grandpa Sam showed John how to play a good game of golf, which he enjoys to this day. Sam even designed a putter, which the PGA turned down – he was just too early.

He was honored in recent years by US Rep. Nancy Mace (R-SC), who on his 104th birthday entered his name into the Congressional Record and acknowledged his military service and humanitarian contributions at the podium in the U.S. House of Representatives while we watched it on television through her office - https://www.facebook.com/RepNancyMace/videos/rep-mace-wishes-lt-col-sam-mulrain-a-happy-104th-birthday/301083888281028/. HHI’s Mayor John McCann honored him for his 105th for National Volunteer Day (2022) - https://www.youtube.com/watch?v=t4K4_v5VbVY.  Sam was always in the news – even at The Seabrook, where he retired after Mina’s passing and selling his beloved Sea Pines home. For many years he enjoyed his three-bedroom above with the porch for the many plants he brought from home. Sam enjoyed wearing his jacket for dinner and loved meeting and talking with new residents. When he had to move into The Fraser due to health concerns, he continued exercising (pull-ups in the doorway – aaack!) and walking. Sam was always walking and always eating Special K for breakfast with non-fat milk. But, for dinner, a fine dessert – always something sweet ending the day thinking about his beautiful Mina as he missed her so much. While at The Fraser, he was cared for by the wonderful Audrey Snell, RN, who he gave a wink and a hug nearly every day after he wheeled up to the nurses’ station to change out the month and day – without fail. And, to Jack Biel, his life-long attorney and friend, thanks to you for the friendship and guidance along the way.

Thank You Sam had a peaceful passing, finally able to soar above and be with his Mina once again – he waited 22 years to be with her again. Look up – there is a shooting star! Grandpa Sam will be interred at a Private Ceremony at Beaufort National Cemetery, Beaufort, SC.  The family requests a “Call to the Community” for stories by Sam’s golf buddies and dear friends to be sent by July 25 to info@IslandFuneralHome.com - subject line: Sam the Man. Donations can be made to Habitat for Humanity. Thank you to all who made an impact on his life and his on yours. Pull a cork out of a good bottle of champagne, pour it, and toast to Sam – we are. There will never be another Sam the Man!

My parents, Helen and Royce Hough, moved to their newly built home on a quiet street in Sea Pines in January, 1971. An accomplished golfer, Dad immediately became involved in the local golf scene. With several buddies, he played the Sea Marsh and Ocean courses two or three times each week. Before long, he added an additional day as a starter on the Jones Course at Palmetto Dunes.The pay wasn’t great, less than minimum wage, but it brought week day golf privileges. Hard to beat free when I and my three sons visited. In the late 70’s, Sam and Mina bought the lot next door to my parents, and built the house which Sam designed. Dad enlisted Sam to join his golf groups, names I should recall but can’t. They usually played high stakes golf, dime skins. I don’t think Dad ever cashed in his winnings, although he kept a sack of change as a testament to his success. Sam, Dad, and my sons when we visited, all collected golf balls, Sam most diligently. Play in the groups often slowed down during peak vacation seasons when more lost balls were available. These were the early days at Sea Marsh, Ocean, and later the Club Course. Alligators often assumed choice sunning spots on the courses.  A favorite spot were the traps just across the lagoon on #10 on the Ocean Course. While not his favorite spot, that is often where Sam’s drives would land. He hated to leave his golf balls in the company of basking gators.  Dad was an on-course marshall at the Heritage and encouraged Sam to enlist. He jumped in and we all know how that turned out. Finally, Dad got Sam to join him on his one day a week job at Palmetto Dunes. My father happily relinquished his job as starter to Sam to become a roving ranger. Sam became a legend as a starter. Both Dad and Sam played golf at Sea Pines into their 90s and remained great neighbors and friends.

The golf scene in Sea Pines is still quite vibrant, but the early characters and relationships can never be replaced.

I meet Mr. Sam while visiting with my friend who worked at the nursing facility where Mr. Sam resided. I didn’t  know him other than just meeting him that one time but he was the sweetest man. He made a lasting impression on me. I have kept up with him through my friend for the past five years. Always asking how is Mr. Sam. I am so sorry for your loss. Rest In Peace Mr. Sam the Man.

We had the pleasure of meeting Sam soon after we purchased the u shaped house on WOW.  He dropped by because he had heard the new owners were going to tear his house down. We assured him that we were not going to tear it down but that we were going to try to improve on his very creative design. We love the u shape. He also wanted his boat light which was made into the lamp stand in the front yard and Mina’s garden figurine. We love his house and hope we are blessed with his long life. We feel living in the house is meant to be because we like Sam love a good dessert after dinner!