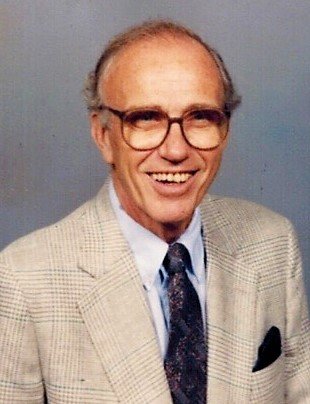 Paul T. Eitel, Jr. returned to his heavenly home on November 23, 2018, after an extended illness, during which time he was cared for at The Preston Health Center of The Cypress.

Paul was born in Louisville, KY. on July 21, 1927. He graduated from the University of Illinois in 1948 with a degree in Architectural Engineering and was a member of Phi Delta Theta.

In July 1949, Paul went to work for the Porter Paint Company, where his father was President. He held many positions in the company, primarily in sales and management and oversaw design and construction of retail stores. He resigned in 1977 and ultimately was led into the renovation of Historical Properties primarily in the Old Louisville area.

From 1984 to 1996 he acquired properties on the National Register of Historical Places, developed a commercial renovation plan, formed limited partnerships for capitol and tax credits, managed the partnerships for five years and then sold the buildings. During this time, he completed the requirements for seven partnerships with 29 structures and he received awards from the Preservation Alliance of Louis-ville and Jefferson County, Inc.

Paul will also be remembered for his leadership and dedication devoted to the Episcopal Church Home, having served on the Board of Trustees for 10 years, following his father, who also served for 10 years.

Paul and his wife Marilyn retired from Louisville to Hilton Head in 1993 to a house that Paul designed and constructed in Leamington Plantation.  Shortly after moving to Hilton Head, Paul began his post retirement career as an Architectural Consultant for the Windmill Harbour ARB, where he served for seventeen years.  Paul and Marilyn moved to The Cypress in 2003.

Paul was an active communicant at The Church of The Cross in Bluffton, SC and served on the Docent Committee. He was also an active participant in the Beaufort County Republican Party and with many Hilton Head Island Republican activities.

Paul is survived by his wife, Marilyn, his children, grandchildren and great-grandchildren. He was preceded in death by his parents, Paul T. Eitel, Sr. and Helen Fihe Eitel and his Stepmother, Bernice Lawson Eitel, and by his sister, Helen Eitel Rollins of York Harbour, Maine.

A memorial service on Saturday, December 8, 2018 at 1:00 p.m., will be conducted by the Very Reverend Dr. Charles W. Owens, III at the historic Church of the Cross, Calhoun Street, Bluffton, SC.; a reception will follow in the Parish Hall.

Paul's final resting place will be at Cave Hill Cemetery, Louisville, Kentucky.  A graveside service will take place on Saturday, December 15, at 11 AM

A reception will follow the Memorial service at the Parish Hall.

Share Your Memory of
Paul
Upload Your Memory View All Memories
Be the first to upload a memory!
Share A Memory
Send Flowers
Plant a Tree