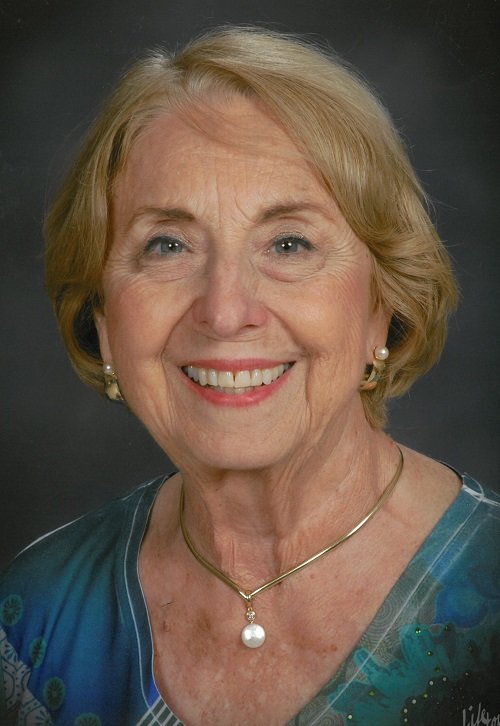 Mary Jo and her beloved husband Richard retired to Hilton Head Island in 1995 from Dearborn, Michigan. They celebrated their 50th wedding anniversary in 2001. Dick passed away in 2004. They were high school sweethearts, and both loved to play golf, bridge, dance and travel. She was a member of Country Club of Hilton Head, and a former member of Oyster Reef Golf Club and Dearborn Country Club in Michigan.

She is survived by her daughter Jane (Dale) Robertson, of Danville, IN; son Peter (Deborah) Happley of Brighton, MI; and son William (Susan) Happley, of Belleville, MI. She was “Mimi” to her beloved grandchildren Kristine, Richard, Jacqueline, Jessica, and David Happley. Several nieces and nephews also survive.

While her children were growing up, she was a busy stay-at-home mother, who was involved with their schools, sports and musical activities. She was also a Girl Scout leader, and active in the Garden Club of Dearborn. While living on Hilton Head, she volunteered for Born to Read, Backpack Buddies, World Affairs Council, League of Women Voters of Hilton Head, Family Promise programs, as well as a long-time usher at the Arts Center of Coastal Carolina. She also served on various programs for St. Francis by the Sea Catholic Church.

She attended Henry Ford Community College and Detroit College of Business, now Davenport University, where she retired as Executive Assistant to the President. Prior to that she was the Western Regional Office Manager for Coca Cola Bottlers of Detroit.

A Mass of Christian Burial will be held at St Francis by the Sea Catholic Church on Thursday, December 6, at 10.30am.

She will be inurned in the St Francis by the Sea Columbarium next to her husband, sister, and brother-in-law.

Arrangements by The Island Funeral Home and Crematory. Islandfuneralhome.com.