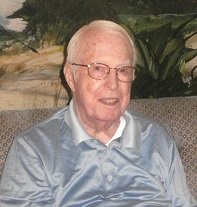 Born in Oshkosh, Wisconsin, he was the son of the late John and Pauline (Weitz) Luft and the brother of the late Rose (Luft) Geiger.

Ralph was a graduate of the University of Wisconsin, Oshkosh.  He attended the US Coast Guard Academy and was commissioned as a LT JG, USCG.  He served on four different ships in the Atlantic during WWll.

He was employed by General Electric for over 25 years where he held the title of National Sales Manager.  During his career at General Electric, he helped develop and patent the popular Midget Christmas Tree Lights.  He was a mason and member of the Scottish Rite.

Ralph was preceded in death by “The love of his life”, his wife, Jean (Berry) Luft.  He is survived by nieces and nephews.  He lived a very full and interesting life filled with smiles, golf, a positive attitude and stories to tell.

A memorial service will be held a t a later date in the Fort Myers Chapel at Arlington National Cemetery with inurnment in the columbarium.  Memorials may be made to the Alzheimer’s Association www.alz.org or the USO www.uso.org in honor of his military service.