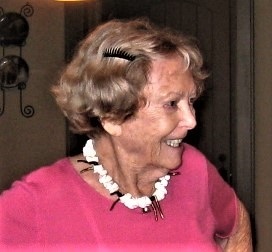 Born in Virginia on July 24, 1919, Elizabeth was raised in Mebane, North Carolina.  She graduated from Queens College in Charlotte with a degree in Home Economics.  She attended graduate school at the University of North Carolina in Chapel Hill and subsequently received a scholarship to Duke University in Durham.  She attained a Masters in Social Work from Duke and, during World War II, worked for the Red Cross in Raleigh and Fayetteville.  After the war she met and married Tom Black-burn who was serving in the Navy.  After being discharged, Tom took a job as head basketball coach with the University of Dayton and the couple moved to Dayton, Ohio in 1948.  Their only child, Liza, was born in 1951.  As Tom built a successful career as a winning coach, Elizabeth became very active in Dayton’s civic and social organizations.

In 1959, Elizabeth and Tom took a vacation to Hilton Head Island and immediately bought a lot from the nascent Sea Pines organization.  They continued to vacation on Hilton Head, but when Tom died in 1963 Elizabeth decided to remain in Dayton and sold their lot.  She taught school and remained a fixture in Dayton until moving to Fort Lauderdale, Florida. Even though she loved south Florida, she never forgot Hilton Head and moved back to Sea Pines after her husband’s death in 1984.  Here she enjoyed membership in the Sea Pines Garden Club, the Art League, and was on the board of directors for the Sea Pines Nature Preserve.  She also put her education to work as the first staff social worker with Volunteers in Medicine.

Through all the years in Florida and South Carolina, Libby remained close to her many friends in Dayton.  She frequently visited Dayton and her friends knew they were always welcome at her homes in the South.

Mrs. Blackburn is survived by her daughter and son-in-law, Liza and Doug Phillips of Travelers Rest, SC.

A memorial service will be held at 10:30am, June 4 at St. Paul's Episcopal Church with a reception immediately following.

In lieu of flowers, memorial contributions may be made to Volunteers in Medicine, Hilton Head Island, SC. or to the Blackburn Scholarship Fund at the University of Dayton or the Dayton Art Institute.