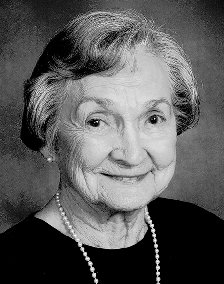 Joyce Ellen Spindler Sundeen, 93, passed away June 3, 2019 on Hilton Head Island, SC. Born in Duluth, MN on May 20, 1926, she was one of three daughters born to Wilfred and Julia Spindler.

During her school years she played drums and was drum major for the marching band. She met the love of her life as a teenager and she and Robert "Bob" William Sundeen were married in Duluth in 1947. As a young woman, Joyce developed a love of textiles and fashion. She sketched designs, loved to sew and loved to help others make fashion choices. After moving to Milwaukee, WI (while Bob attended college), she worked for The Kraft Company and gave birth to their daughter. They later moved to Glenside, PA, where their son was born, and then to southern New Jersey. As a resident of Moorestown, NJ, where they lived for more than 25 years, Joyce developed the reputation of an excellent cook, an intrepid volunteer and a pretty fair bridge player. She was an active member of her church, volunteered at the local hospital and acted as an advisor to the church youth group, Girl Scouts, and hospital teenage volunteers. After her children were grown, she worked for a number of years at an exclusive women's fashion store and travelled extensively with Bob as his job took him to many international destinations.

In 1989 upon retirement they moved to Hilton Head Island, SC where Joyce found new activities including joining the Oyster Reef Golf Club on the Hilton Head Plantation. As a member of Christ Lutheran Church, Joyce served on the alter guild. Volunteering for a hospice charity for at least 10 years, she was awarded Volunteer of the Year in 2005 by Hospice Care of the Lowcountry.

Joyce is predeceased by her husband as well as her sister Lois Spindler Simpson. She is survived by her sister Carol Spindler Dahl of Burnside, MN as well as her children Deborah Mumper (Rich) of San Jose, CA and her son Robert W Sundeen Jr. of Seneca, SC. Her beloved grandchildren include Jessica Mumper Fernandez (David) of San Jose, CA, Kelly Mumper (Erin) of Susanville CA, Erika Sundeen and Philip Sundeen both of Greensboro, NC along with two great-grandchildren Willow Mumper and Bradley Fernandez.

A memorial service is expected to be performed in San Jose, CA at the home of her daughter. In lieu of flowers, donations may be made to a charity of your choice, but those held in high esteem by Joyce are Hospice Care of the Low Country, any Disabled Veterans charity, Alzheimer's Foundation of America, American Heart Assn, Glaucoma Research Foundation and American Cancer Society.

The Island Funeral Home an Crematory.

Share Your Memory of
Joyce
Upload Your Memory View All Memories
Be the first to upload a memory!
Share A Memory
Send Flowers