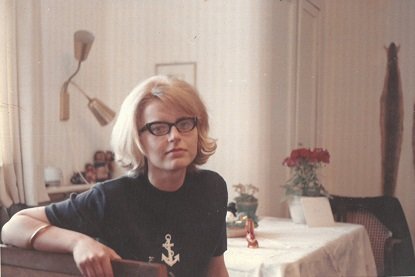 Gerda K. Schmied Carney, 77, of Hilton Head, South Carolina, formerly of Bluefield, Virginia passed away peacefully on Monday July, 29th with the love of her husband and family.

She was born in Mahrisch Rothwasser, Germany on April 15th, 1942 the only daughter of Kurt and Gertrude Schmied.  After losing both parents at a young age she went to live with a loving family in Germany whose only daughter, Marlis, became her “sister”.   Fiercely determined to stand on her own two feet, this time in her life instilled grit and resilience which she carried with her for a lifetime.  She graduated college and began working at the American hospital where she met her partner for life.  She married John V. Carney in 1965 and at the age of 23 came across the ocean to Morgantown, West Virginia, where she immersed herself into the American dream.  She worked at WVU hospital, had two beautiful daughters and supported John while he went to pharmacy school.  From Morgantown, they moved to Princeton, WV where Gerda worked at the Mercer County Health Center and John began a successful lifelong career as a pharmacist.  From Princeton they moved to Bluefield, VA then on to Hilton Head in 2013 where they enjoyed retirement life on the golf course.

Gerda loved to play golf, and even though her game was not the best, she always looked the best.  She loved shopping with her good friend Betty Kincaid to find the perfect outfit and shared many glasses of wine with her lifelong friend Jo Nuce.

She was a devoted and loyal wife, mother, Omi and friend who always put the needs of others before her own.  Her German spirit and determination will live on through everyone who knew her, especially Heidi and Carolyn whom she was so very proud.  Her only grandson, Matt, who in her eyes could do no wrong, made her eyes sparkle until the very end.

A Mass of Christian Burial will be celebrated at 10:30 am on August 9th, 2019 at St Francis by the Sea Catholic Church in Hilton Head Island, SC.  The family invites you to a reception at Port Royal Beach Club at 12 noon.

In lieu of flowers, remembrances may be sent to the Alzheimer’s Association at alz.org.  Arrangements by The Island Funeral Home and Crematory.  islandfuneralhome.com.

Share Your Memory of
Gerda
Upload Your Memory View All Memories
Be the first to upload a memory!
Share A Memory
Send Flowers