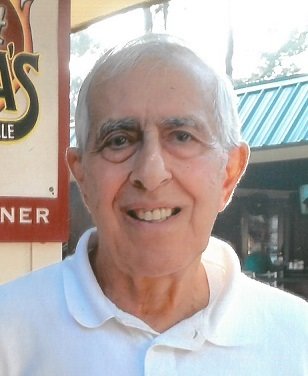 George Krikorian, 87, of Hilton Head Island, passed away on October 20, 2019.  George was born in Massachusetts in 1932 and lived there until joining the U.S. Air Force in 1951.  He spent 20 years in the Air Force and retired in 1971.  He was a Korean War veteran and was stationed in locations throughout the Eastern United States and in Japan and Turkey.  During George's Air Force career, he loaded and diffused bombs used on military planes, but spent most of his Air Force career as a criminal investigator in the Air Force Office of Special Investigations (OSI).  After retiring from the Air Force in 1971, he went to work for the U.S. Government as a criminal investigator with the Internal Revenue Service and the U.S. Treasury, retiring in 1987.  George and his wife Betty retired to Hilton Head Island, SC.  He continued to work as a private investigator for many years, and in Security for the Crowne Plaza Hotel on Hilton Head Island for another 10 years.  George loved Hilton Head Island.

George is survived by his wife of 66 years, Betty, and many people that knew him said he was the best husband they ever met.  He is also survived by his 3 sons, Geoff and his sons Geordi and Galen; Greg and his wife Priscilla and their children Tifini, Rachel, Emily, James, and Hannah; and Gary and his wife Carol.

George was a member of St. Andrew by-the-Sea United Methodist Church, where a service will be held for him on Thursday, October 24, 2019 at 11:30 am, with a reception at the church immediately following.  George will be buried with military honors in the Beaufort National Cemetery, SC. Funeral arrangements are being handled by The Island Funeral Home, 4 Cardinal Road, Hilton Head Island, SC.

George's family wish to thank Agape Hospice for the comfort they provided George.  Donations in his name can be made to Agape Hospice, 1800 Paris Ave., Port Royal, SC, 29935.  Islandfuneralhome.com