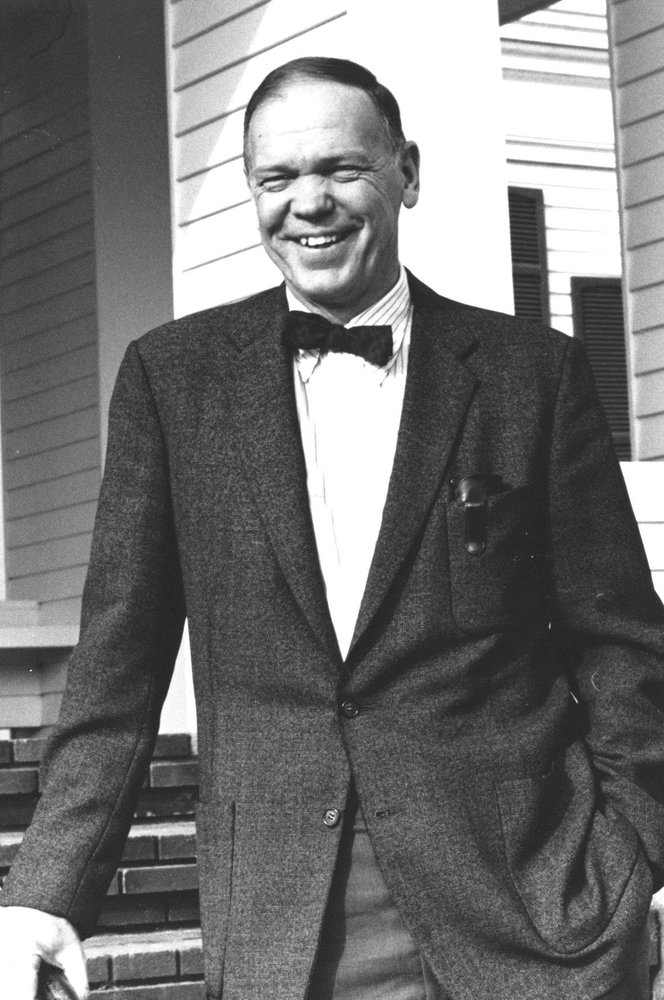 The Reverend Edwin Michael Ward passed away peacefully in his home on Hilton Head Island, SC on October 29, 2019, at 92 years old.    Ed was a natural leader with a deep faith in a Living God; a gentleman of grace, character and integrity; an inspiring speaker and preacher of profound intellect and insight.  He devoted his life to serving the people he loved, the Church he cherished, and the young men he taught, counseled and mentored.  His welcoming home was always filled with the dogs he loved, and Dixieland and Big Band Jazz.  He was predeceased by his beloved wife and steadfast partner of 61 years, Allein White Ward of Chester, SC.

Ed was born in Richmond, VA to Varney Stuart Ward and Virginia Michael Ward, but was raised in Atlanta, GA.  He cherished his southern values, and remained deeply loyal to his Atlanta boyhood friends his whole life.

Ed was a proud graduate of Middlesex School in Concord, MA (1945), and played competitive sports in addition to his academic pursuits.  His experience there inspired his long career as a teacher, chaplain and headmaster.  After serving in the U.S. Army, Ed graduated from Emory University (1950) in Atlanta, where he was President of the Chi Omega fraternity and a member of the ODK Leadership Society.  He received his M. Div. in 1955 from Virginia Theological Seminary in Alexandria, VA, where he was Student Body President.    After his ordination as an Episcopal Priest, he served for 4 years as Vicar of St. Mark’s Episcopal Church in Troy, AL.

Ed was the quintessential schoolmaster, and was respected and revered by faculty and students alike at the boarding and day schools he led.  He was a teacher, coach and chaplain at St. Mark’s School in Southborough, MA before becoming Headmaster of Salisbury School in Salisbury, CT for 16 years.  Under his courageous, faithful and steady leadership, Salisbury weathered the tumult of the 60’s and 70’s and maintained the school’s commitment to graduating young men of character as well as intellect.  He was honored to serve as President of the National Association of Episcopal Schools from 1970-1973.    He always remembered the Salisbury years as his most fulfilling.  Evidence of his lasting legacy includes the Ward Prize, presented annually to the graduate who exemplifies Ed’s quiet leadership, and Ward House, the dorm named in his honor.   He returned to the south in 1982, as Headmaster of St. Stephen’s School in Alexandria, before finishing his career as President of Flint Hill School in Oakton, VA, which he founded in 1990.

Ed and Allein were among the first vacationers to Hilton Head Island in 1964.  They reveled in their annual summer reunions with family and friends on the Hilton Head beach, and became property owners in 1970.  They became permanent residents when they retired from school life in 1992, and Ed served as Pastoral Associate at St. Luke’s Episcopal Church on Hilton Head for 8 years.  He remained an involved parishioner until his death.

A celebration of Ed’s life will be held at St. Luke’s Church at 11am on Saturday, November 23rd.  In lieu of flowers, donations may be sent to St. Luke’s at 50 Pope Avenue, Hilton Head Island, SC 29928.  The Island Funeral Home and Crematory.  Islandfuneralhome.com.

Share Your Memory of
The Reverend Edwin
Upload Your Memory View All Memories
Be the first to upload a memory!
Share A Memory
Send Flowers