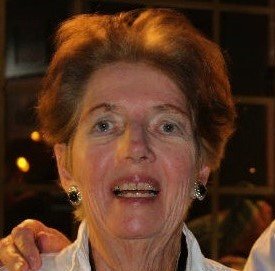 Frances Irene Chalmers Fletcher of Hilton Head Island passed peacefully on May 2nd 2020 with her family assisting her going home to be with her Creator and her late family in heaven. The daughter of the late Martin D. and Josephine Harrington Chalmers she was born February 18, 1936 in Brooklyn, NY.  As a loving wife, mother and grandmother she was loved in return by her family and enjoyed a full life with many friends who shared their affection with her.

Frances was a mother and home maker for her family and after her youngest child entered school, she became a pre-school teacher and later spent many years as the manager of a pediatric dental practice in Mount Kisco, New York.

1992 was a watershed in Frances and Joe’s lives.  Their oldest son, Joe, was married, Joe & Frances retired to Sea Pines on Hilton Head Island, and they were blessed by the birth of their first grandchild, Erin Marilyn Taylor. Frances quickly “unretired” to become a grandmother.  Over the years Frances could be seen walking along the ocean shores with her grandchildren. You could hear their playful squeals as she swung them over a breaking wavelet, as they played in the sand, or flew a kite.

In addition to volunteer work Frances was a founding member of the Creative Retirement Center of the University of South Carolina Beaufort, where she served as the Co-Chair of the Development & Membership committees.  She was also on the staff of USCB-Hilton Head’s admissions office.

Frances enjoyed the natural wonders of Hilton Head Island walking the beaches and tending to her gardens.  As her family and friends reflect on Fran’s life, they will cherish the many memories she has left for them. They will all tell that she was a friendly person, genuine, warm and holding strong moral and ethical standards.  They will tell you that she was a remarkable human being who would never allow any intrusion into her commitment and love of her family.  Frances led her life and taught her children the old-fashioned way. It was said of her that while she was taken out of Bay Ridge-Brooklyn, Bay Ridge was never taken out of her.

The family wishes to thank Hospice Care of the Lowcountry for the tender comforting care given to Frances in her final days.

A Mass of Christian Burial at Holy Family Catholic Church and interment in Six Oaks Cemetery in Sea Pines will be held at future date.

In lieu of flowers, the family will appreciate that a memorial contribution, in Frances’s name, be made to:

Share Your Memory of
Frances
Upload Your Memory View All Memories
Be the first to upload a memory!
Share A Memory
Send Flowers