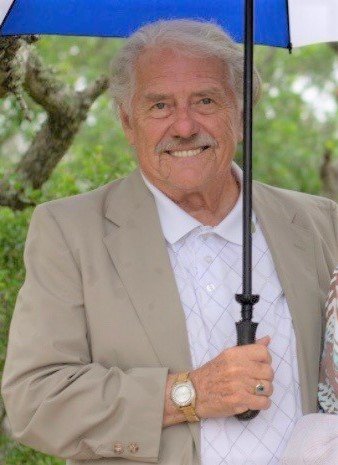 Ed was born in Brooklyn, New York on January 01, 1938, to Albert and Eleanora Cooley, the youngest of five children.

Ed always had fond memories of growing up in Brooklyn. After meeting and marrying Wilma Schroeck of Ridgewood, Queens, they moved out to the country becoming long-time residents of Sayville, Long Island.

Ed settled on “the Lots of it“, where he and Wilma raised five children.  Soon his love of animals brought along horses, ducks, chickens and goats. He took great pleasure in teaching his children to ride and giving them an idyllic homestead.

Ed enjoyed coaching his children, grandchildren and great-grandchildren whether it was in sports or life learnings often referring back to his school of hard knocks training in Brooklyn of which he was very proud.

He was a business owner and perpetual entrepreneur who took pleasure in taking on a variety of ventures and jobs.

Ed always considered himself a lucky man and indeed that proved true in 1992 when he met and later married Jacqueline Hogan.

Together they enjoyed their families, friends, traveling, Horse racing always following the elusive Triple Crown and of course their love of their dog, Bear

At family gatherings, Ed rarely missed the opportunity to be the life of the party and a chance to dance to Barry White.

Ed took extreme pride in his children and family. He will be remembered as a loving father and grandfather, for his enjoyment of life, his wildly entertaining stories, generous smile , his willingness to help anyone in need whether it was a roof over their head, food or just a kind uplifting word, and for his eternal optimism always able to see the humor and bright side of life.

Ed had a life-long love affair with seafood, which gained him the nickname, Opa Lobster.

He was passionate about Horse racing, vintage cars, sports and a good bargain!

Ed prided himself on his driving skills and at age 68, earned a CDL license.  This afforded him the opportunity to drive a tractor-trailer, limousine, school bus, elder care transportation and the Hilton Head Trolley. Through each of these Ed interacted with people from ages 1-100, never passing up an opportunity to make someone feel special.  A testament to his kindness was the joy he brought to one young boy with disabilities, by taking the time to invite him to sit behind the wheel and telling him that he too could one day drive a trolley.  The smile on that boy’s face bringing tears of joy to his parents and to Dad whenever he retold the story.

He is preceded in death, by his parents, Eleanora and Albert, his three brothers, Alfred, Harold and Lawrence Cooley, his sister Eleanora Hunter and his two sons, Louis and Kenneth Cooley.

A gathering to celebrate his life will be held later this year.

See you all of a sudden, Dad!

Share Your Memory of
Edward
Upload Your Memory View All Memories
Be the first to upload a memory!
Share A Memory
Send Flowers