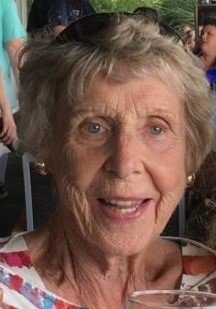 Joan Patricia LeCouffe Street, 85, passed away August 16, 2020 at her home in the TidePointe Community on Hilton Head Island.  Before moving to TidePoine in 2019, Joan had been a resident of Port Royal Plantation since 1987 and a member of the Port Royal Golf Club.

Joan was born in Flushing, NY in 1934, daughter of the late Emile Napoleon LeCouffe and Laura Sargent LeCouffe.  They moved to Douglaston, NY in 1937 and then to Manhasset, NY in 1947.  She graduated from Manhasset High School in 1952 where she had many friends especially in the Alpha Beta Pi Sorority.

Joan attended Lasell Junior College in Auburndale, MA, graduating in 1954.  She met Tom Street, who was attending MIT, and they were married in 1954.  After two years in San Marcos, Texas they moved to Huntington, NY where they lived until 1983.

Joan was active in the Junior League of Huntington and Indian Hills Country Club where they were members from 1966 to 1983.  She was in real estate sales for several years with her mother-in-law Ruth Street and with Bushell and Clous in Huntington, until they moved to the Netherlands in 1983, where Tom worked for Fokker BV.

Joan and Tom returned to the US in 1987, building a home in Port Royal Plantation, Hilton Head Island, SC.  She enjoyed many bridge games, golfing, gardening and reading.

Joan is survived by son Jeffrey Street of Bosman, MT; and daughter and son-in-law Cynthia and Peter Vassello of Hilton Head Island.  She was predeceased by her husband Tom in 2019.

A celebration of Joan’s life will be held at a later date.