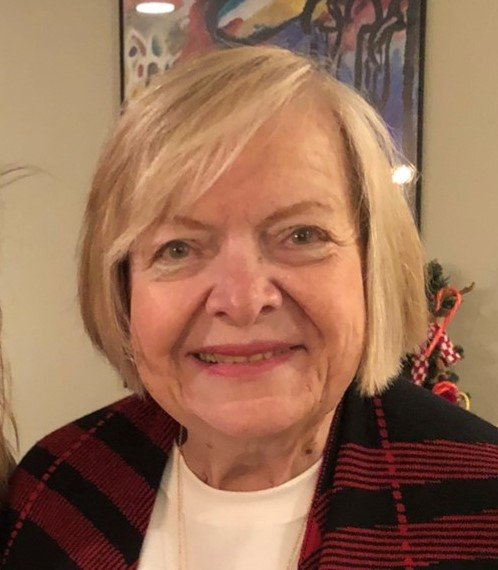 Dolores Blusewicz, age 82, passed away October 13, 2020 in Hilton Head. She died in the presence of her family, which was fitting as she had lived her life embracing time with them. Known for her distinctive loud voice and love of talking, Dolores has probably talked to almost everyone on Hilton Head Island.Originally from NJ, Dolores was born in Passaic to Stella Krawiec and Julius Figula. She grew up in Walling-ton with her beloved siblings, brother Jules and sister Joan. She graduated at the top of her class from East Side High School in Patterson. She was an original employee of ADP with the Taub brothers, and stayed with them when the company expanded with Frank Lautenberg (who later went on to be a NJ Senator). She had tons of stories about the beginning of this company that later went on to be the billion dollar company it is today. After enjoying her single years with her friends hitting ski slopes, renting lake house cabins, and attending dances throughout Jersey, Dolores married Frank Blusewicz, from Elizabeth, on October 19,1963. They moved to Edison NJ, where they lived for 37 years. They enjoyed going to the Jersey Shore, Florida, and the Islands of the Carib-bean. Later in their marriage, Frank and Dee could often be found playing Black Jack together on a Saturday in Atlantic City, but would claim it was the other one’s idea to go. When they moved to Hilton Head in 2004, Dolores discovered Mahjong and it quickly became a weekly routine to play Mahjong and Scrabble at the Share Senior Center. She enjoyed years of friendships at the Share Center, which she found supportive after the death of her beloved Frankie after 42 years of marriage. She had her one and only dear daughter, Dr. Tracy Ann Blusewicz, who quickly became her partner in reading, traveling and going to shows. At a young age, Tracy had the pleasure of joining Dolores in seeing the likes of Liberace, the Carpenters, and Tony Bennett. Dolores was an inspiration to Tracy, who nurtured her work ethic, love of travel, laughter, Girl Scout leadership skills, and her ability to enjoy life to the fullest. Dolores hit the jackpot with her son in law, Jason Pampucha. Friends from the beginning, Jason was the one person who really “got” her humor. For 20 years, they laughed together at their corny jokes while talking daily. Jason and Tracy could always count on Dolores being supportive for them, she was the true matriarch of the family. Dolores was a parishioner of St. Francis on Hilton Head and enjoyed being part of the women’s club for years. She was a voracious reader who always had a book in her pocket, she spent hours in bookstores and libraries. She explored Europe, especially enjoying the United Kingdom and castles. Another passion for Dolores was Broadway, she had seen hundreds of shows from the 1960’s to the present. She saw the greats on Broadway from Elizabeth Taylor, Ethel Merman, Patti Lupone, Bette Midler, to her latest favorite, Hugh Jackman. She was proficient at getting a front space at the stage door and had the pleasure of meeting her favorites. Her true joy later her life was spending time with her beloved grandchildren. She could be seen at soccer fields, ballet recitals, birthday par-ties, school plays, and after school pickup lines. She traveled every chance she could with the kids, exploring Disney, and introduced the kids to Broadway. Grandson, Cole Pampucha and twin granddaughters Stella and Cami “her girls” have many fond memories of their times with Grammie Dee, and they will always look to see if the gates are open on their trips back to SC. In lieu of flowers, please make a donations to: Hilton Head Safe Harbour, a non-profit organization, dedicated to helping seniors stay in their home. Visit www.hhisafeharbour.org to make a donation. Visitation at the Island Funeral Home is Monday, October 19th from 10 – 11 a.m. with a funeral ceremony at 11am.

Share Your Memory of
Dolores
Upload Your Memory View All Memories
Be the first to upload a memory!