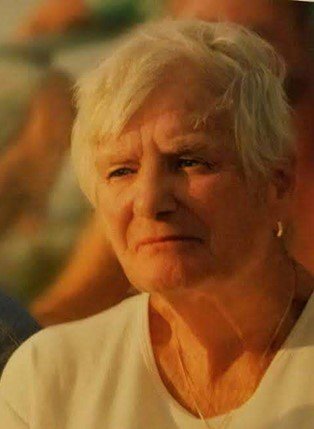 Celebrating the life of Theresa Ann Donohue Delling, 87, who passed away June 23, 2021, at The Seabrook of Hilton Head Island, South Carolina.

Terry was born July 5, 1933, in San Francisco, California.  She and her parents, John and Marjorie Donohue, and sister Mary, lived in New York, New York and later settled permanently in Grosse Pointe, Michigan.

She attended Grosse Pointe High where she had a vast array of friends with whom remained close throughout her entire life.  It was also there that she met her husband of 60 years, Bill Delling.

Terry and Bill and their children Pam (Swenk) and Chris ultimately settled in Grosse Pointe Woods, Michigan, where she was active in tennis, the St. Paul Catholic Church choir, bridge clubs, investment clubs and many other things that allowed her to continue to build strong relationships in the community.  They also had a home in Good Hart, Michigan where the family enjoyed many wonderful times year-round.

Terry and Bill eventually followed their dream and moved to Hilton Head, South Carolina, where again they built a strong network of friends who shared their love of tennis, golf, the ocean and all the other amenities offered.  In Hilton Head, Terry was active with The Bargain Box, the Arts Center of Costal Carolina, Herb Society of Hilton Head and the Hilton Head Humane Society.

Known for being outgoing, social and committed to friends and family, she will be deeply missed by many.

Celebrations of Life are planned for South Carolina and Michigan.

Share Your Memory of
Terry
Upload Your Memory View All Memories
Be the first to upload a memory!
Share A Memory
Plant a Tree