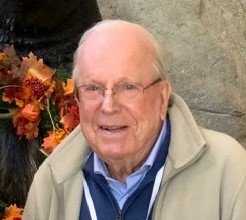 Horst Paul (Dan) Daniels of Hilton Head, SC, passed away on June 28th, 2021, at the age of 90. Dan was the loving husband of the late Ann (Albright) Daniels, the father of Bryan Daniels (Cathy) of Winnetka, IL, Steve Daniels (Jennie) of Romeo, MI, and John Daniels (Katy) of San Diego, CA. Dan was the beloved grandfather of Paul (Dionne) of Singapore, Marc and J.D., both of Grand Rapids, MI, and Nicole, Colin, and Rebecca of Winnetka, IL.

Dan was born in 1931 in Waldorf, Germany, to Gerhard Kurt Danielis and Katherine Wolters. During WWII, Germany proved a difficult time and place for a teenager. Dan’s experiences during this era likely led to Dan’s determination, tenacity, and frugality. He spoke of shining boots in the U.S. Officer’s Club in exchange for cigarettes, which he subsequently traded for food. General Eisenhower was a memorable patron.

In 1948, Dan immigrated with his father to Yellow Springs, Ohio, where he attended Fairborne High school and later graduated from Miami University (Oxford) in 1954. Upon graduation, Dan continued his education at Thunderbird School of Global Management, where he graduated with an MBA in 1956, concentrating in International Business.

After completing his education, Dan moved to New York City to work for American Foreign Power, where he serendipitously ran into his college sweetheart, Ann Albright, who too had been working in NYC. Shortly thereafter, Dan and Ann were married in Bucyrus, Ohio, in 1957. In their first year of marriage, the couple moved to Mexico City, where Dan worked for AFP and Brunswick before joining Eli Lilly. Though he spoke little Spanish, Dan convinced Lilly he could sell pharmaceuticals to physicians in Mexico and successfully did just that. This experience exemplifies the self-confidence and determination that Dan brought to all his endeavors throughout his life. Dan’s career with Lilly allowed his family to experience the expat life beginning in Mexico, continuing to Germany, and ending in Brazil, where Portugués became his fourth language. In 1972, Dan transferred back to the U.S. (Carmel, Indiana) and continued to work with Lilly until retiring in 1986. Dan fondly remembered his foreign assignments where he established many life-long friendships.

After his corporate career, Dan began his entrepreneurial career by joining Sicor, an Indianapolis-based pharmaceutical services startup, as the head of sales from 1986 to 1989. Not quite ready to retire completely, he then founded PharmaResearch, a company that prepared physicians to participate in clinical trials.

In 1992, Dan worked for the International Executive Service Corp, a not-for-profit focused on providing consultancy services to emerging market businesses. Ever the international enthusiasts, Ann and Dan spent time in Guatemala, where Dan consulted with a pharmaceutical company. Later, in the Czech Republic, Dan advised a former Czechoslovakian Colonel-turned-oligarch on his many emerging business ventures.

For more than 25 years, the Daniels family celebrated many family holidays in Hilton Head, which led Ann and Dan to build their dream home there in 1993. This new home became a base from which they planned many wonderful worldwide trips and adventures.

Dan was a lifelong member of Rotary International, the Hilton Ski Club, the Jazz Club, and a participant in The Farmer’s Market and The National Audubon Society. In 2012 when Ann passed away, Dan moved to The Cypress. There he met many new and wonderful friends.

Share Your Memory of
Horst
Upload Your Memory View All Memories
Be the first to upload a memory!
Share A Memory
Send Flowers