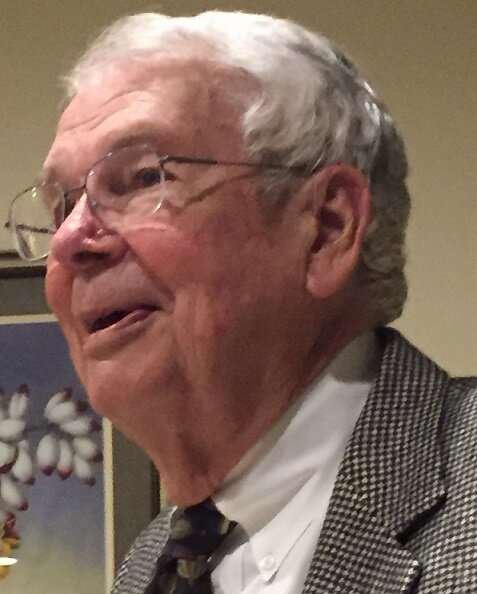 George earned a Bachelor of Science degree at Dartmouth College as well as a Master’s degree in science specializing in mechanical engineering from the Thayer School of Engineering at Dartmouth.

George had a stellar 35-year career at General Electric. He joined the company’s manufacturing management program in 1955 and eventually moved to the Aircraft Engine Group (now GE Aviation) in Cincinnati, Ohio.  He was appointed Vice President and General Manager – Aircraft Engine Manufacturing in 1980, a position he held until his retirement in 1991.  He oversaw nine manufacturing plants, 21,000 employees and the manufacture of thousands of jet engines for a wide range of commercial and military aircraft during a significant increase in production in the 1980s.  George was a director of the Advanced Manufacturing Sciences Institute and was elected to GE’s Propulsion Hall of Fame in 1996. George described himself as an “old school guy” who believed that “perseverance and hard work will get you up the corporate ladder.”

During his 25 years in Cincinnati, he was active in various community organizations. As the Area Representative for GE Aviation, he served on the board of Bethesda Hospital, chaired the Fine Arts Fund in 1983, chaired the Dan Beard Council Boy Scouts capital fund in 1986, and served as Chairman of the Greater Cincinnati Chamber of Commerce in 1992.

George was not only a captain of industry, he was also a Renaissance man with many passions, but especially music. As a child he studied piano, and one of his most significant childhood memories was playing the church organ as a substitute for the regular organist. He loved classical music and served as treasurer on the Board of the Hilton Head Orchestra. George also shared his time and talent for 15 years at Memory Matters, a dementia care program, where he volunteered weekly playing the piano for sing-alongs with the clients. George remarked that he always had music playing within him.

George was a lifelong, avid golfer and was teamed with Joe DiMaggio, Otto Graham and another amateur to win the 1983 American Airlines Golf Classic in Waikoloa, Hawaii. He was a member of the Long Cove Golf Club and participated in many local charity tournaments. In addition to golf, George enjoyed boating, international travel (especially cruising), reading and lifelong learning. He also served as the vice chair of the Board of Directors at Long Cove Club and led the Grants Committee of the Endowment Fund which has since provided significant funding to local charities.

George was predeceased by his first wife, Marjorie Chase, whom he married in 1953. After her passing, George met and married Marianne (Sifaneck) Krall with whom he celebrated 23 years of marriage. George is also survived by his beloved son, David (Cindy), grandchildren Steven (Emily) and Andrew, great grandchildren Charlie and Caroline, and his beloved sister-in-law, Mary Lou Murphy.

With his marriage to Marianne, George became a treasured member of his second family. In addition to his beloved wife, he is survived by his stepdaughter, Suzanne (Leslie), granddaughters Sophia and Anna, and daughter-in-law, Reiko, wife of George’s late stepson, Stephen.

George and Marianne had moved from Long Cove to the Cypress retirement community in 2017 where they continued to enjoy the friendship and support of so many friends.

A celebration of George’s life will take place on Thursday, July 14, 2022 at 2:00pm at All Saints Episcopal Church with a reception to follow.

Memorial donations in George’s honor may be made to The Deep Well Project www.deepwellproject.org, and/or Memory Matters www.mymemorymatters.org.

Share Your Memory of
George
Upload Your Memory View All Memories
Be the first to upload a memory!
Share A Memory
Plant a Tree