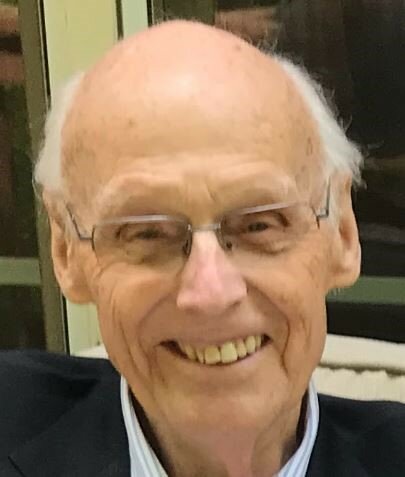 Wayne Peterson passed away peacefully on Saturday, November 13 at the age of 83. A long-time resident of Bluffton and an active member of the community, Wayne was admired by all who met him and will be deeply missed.

Born in Minneapolis, MN to Wallace and Vera Peterson, Wayne later received his Bachelor’s degree from Macalester College where he majored in economics and was a member of the choir. He met the love of his life, Karen Gabrielson, at a church picnic and they were married in 1959. Wayne enjoyed a long career with the Equitable Life Assurance Society and as a private consultant to the insurance industry.

Wayne believed in community involvement and as such was a member of the Minnesota National Guard and Ohio National Guard; an officer in the Colts Neck (NJ) Fire Department; an officer in the Clive (IA) Fire Department and member of the City Council; assistant director of the Des Moines Area Transportation Planning Commission; trustee of the Des Moines Metropolitan Transportation Authority; founding member and president of Ascension Lutheran Church, Newtown, PA; president, River Knoll Homeowners Association, Washington Crossing, PA; treasurer of the Bluffton Officials Association; secretary/treasurer of the Crescent Property Owners Association; youth coach and referee for baseball, soccer, and basketball in Colts Neck, Clive, and Bluffton; Hilton Head Choral Society member; 18th hole marshal at the Heritage Tournament; volunteer at the Concours d'Elegance; and manager at a Hilton Head voting facility.

He is survived by his wife; son Richard (Susan) and their children Jeffrey, Tyler, and Krista (Will Lineberry); daughter Barbara (Robert Gordon) and her daughter Alexandra Clint and stepdaughters Katelyn Gordon (Drew Grandjean) and Alyssa Gordon; and son Christopher (Emilie Bruzelius); along with seven nieces and nephews.

A memorial service is being planned for after the holidays.

Share Your Memory of
Wayne
Upload Your Memory View All Memories
Be the first to upload a memory!
Share A Memory
Send Flowers