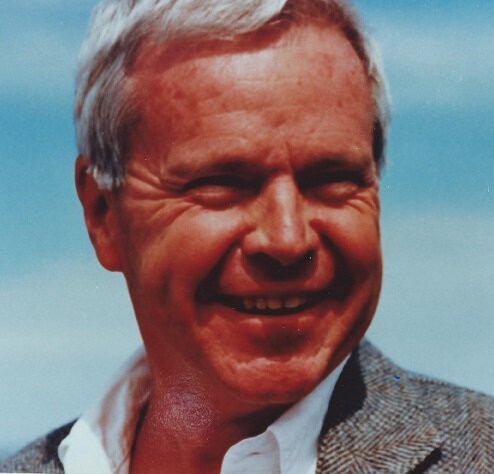 “The secret to a long and healthy life is a gin martini every night, floss every morning, and NEVER RECYCLE!” by George B Farnsworth

GEORGE B. FARNSWORTH. George Barclay Farnsworth, 97, of Hilton Head, SC., passed away peacefully on the evening of December 17, 2021. He was born in Park Ridge, IL., on January 8, 1924, to Frank and Miriam Farnsworth. George graduated from Purdue University in 1948 with a degree in Electrical Engineering which got him started with his successful executive career.  George served in the US Army Air Corps (later known as the Air Force) from 1944 to 1948, where he flew P-38 and P-40 fighters, and later B-29 bombers in WWII in North Africa and Italy. In 1948 he joined GE on their Test Program and quickly advanced to the senior executive level running various businesses including VP Semiconductor Products, VP Component Motors and his final role as Senior VP and Group Executive of GE Aerospace, then retiring in 1985. He also served on the Board of Directors for the semiconductor equipment manufacturer Applied Materials Inc. from 1974 to 1997. His true joy in life was flying his four, vintage open-cockpit biplanes based at the Ridgeland, SC airport, where he would maintain his adept flying skills performing aerobatics, loops, spins, rolls, stalls, towing gliders, or just flying around the Hilton Head area for fun, giving rides to anyone that would accept his offer. In addition to his passion for flying, he also enjoyed playing golf, reading classic books and building the perfect gin martini! George was preceded in death by Mary Jane, his beloved wife of 55 years, his brother Frank Farnsworth, daughter Anne Berberi, granddaughter Marybeth Farnsworth, and his parents. He is survived by his sons George B Farnsworth Jr. (partner Michael Holden), of Banner Elk, NC and John Farnsworth (wife Claire), of Ponte Vedra Beach, FL, Son-in-law Maroun Berberi, his grandchildren Matthew Berberi, Katia Berberi (husband Steve Drapeau), Jessica Reagan (husband Andrew), great-grandchildren Simon and Eliza Reagan, and Susan Phillips of Lake Geneva, WI his dear companion.

We are most grateful for his loving caregivers: Felisca Rodgers, Margaret Williams, Elvena Gordon and June Johnson, who made his final days safe and as comfortable as possible.