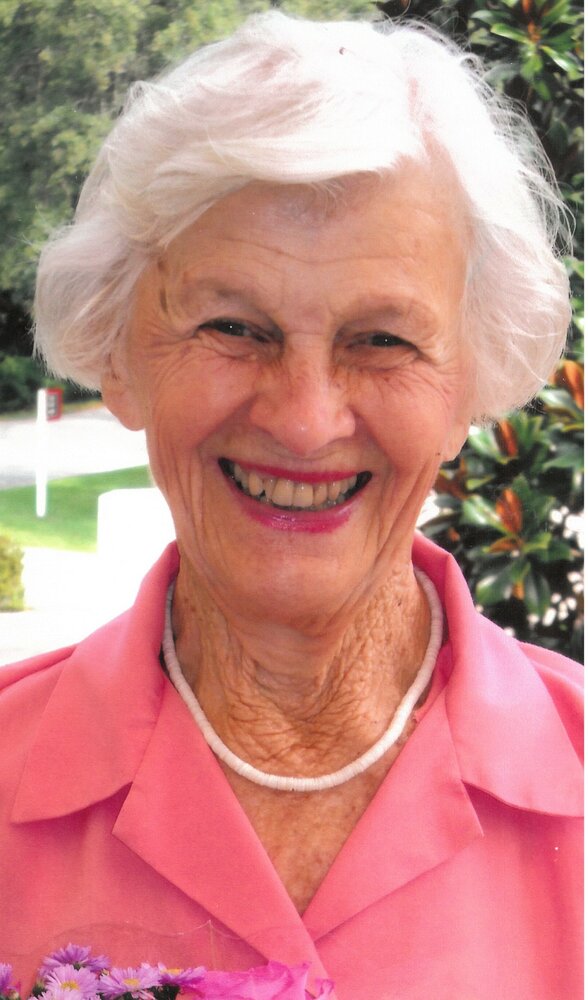 Mildred (Millie) Slack Timmerman passed away peacefully on Wednesday, December 15, 2021 at the age of 104.  A long-time resident of Hilton Head Island and active member of the community, Millie was admired by all who met her and will be deeply missed.

Born in Philadelphia, PA to Justus Kooker Slack and Helen Wilson Slack, Millie graduated from West Chester, PA State Teacher’s College in 1939 with a B.S. in Education.  After graduation, she taught school in Lewes, DE where she met the love of her life, Clarence A. (Tim) Timmerman.  She was recruited to work as a social director for the USO in New York and New England until her marriage to Tim in 1942.

She and her husband, Tim lived in Ridgewood, NJ for many years where they raised their four children, Bob, Bill, Nancy and Ken.  While there, she was a counselor for American Field Service (AFS) students in Bergen County and hosted a student from the Netherlands, Jaap Mulder who remained a part of her family until the time of her death.  In Ridgewood, she was also a Cub Scout den mother, a Girl Scout troop leader and served as Junior Choir director at the First Presbyterian Church for 14 years.  She also volunteered at the Valley Hospital in Ridgewood.

In 1978, Millie and Tim moved to Hilton Head Island, where they built a home in Port Royal.  They were charter members of the Bear Creek Golf Club and also belonged to the Port Royal Golf Club.  In Port Royal she served on the Board of Directors of the Landowners Association and also on the Golf Club.  She was an enthusiastic participant in the Port Royal Ladies Coffee Group, instituting the annual Cookie Exchange and hosting it for many years.

Millie was an active member of the Hilton Head Island Garden Club where she served as president and as Corresponding Secretary.  She belonged to the First Presbyterian Church of Hilton Head where she served two terms on the Board of Deacons, was a long serving member of the Pastoral Care Committee and Chair of the Bereavement Committee.  Every Wednesday, she participated faithfully in the Women’s Spiritual Exercise Group, where she made many dear friends.

After Tim died in 1989, Millie found meaning by volunteering in the Emergency Room at the Hilton Head Hospital.  She brought warm blankets to patients and helped to make their families feel at ease.  In 2015, the Town of Hilton Head awarded her a plaque for her 17,000 hours of service.  She continued volunteering past her 100th birthday.

Millie loved to travel, play golf, participate in her book group and play duplicate bridge.  Most of all, she loved her family, hosting grandchildren for “Grandma Camp” for many summers.

She was preceded in death by her husband of 47 years, Clarence and by her brother, Robert Slack, and sisters, Louise Kalpousos and Elinor Campbell.  She is survived by her children: Robert (Bob) W. Timmerman (Nancy) of Boston, MA; William (Bill) A. Timmerman (Pierrette) of Paris, France, Nancy Landry (Larry) of Hilton Head Island and Kenneth (Ken) Timmerman (Christina) of Fernandina Beach, FL.  She is also survived by 11 grandchildren, 5 step-grandchildren, 20 great and step great grandchildren plus a great great grandaughter, as well as her AFS son, Jaap Mulder of the Netherlands and many friends.

Services will be on December 28th at 11:00 a.m. at the First Presbyterian Church of Hilton Head, 540 William Hilton Parkway.  Due to the high transmissibility of the Omicron variant, masks are required.  Separate balcony seating will be available for those who do not have proof of vaccination.