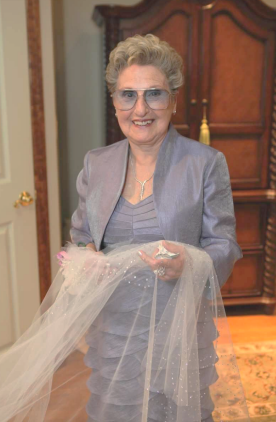 It is with both sadness and joy that we say goodbye to Mom, Grandma, Nana, and Sandy, to most of Hilton Head Island. She passed peacefully in her sleep, on the morning of Tuesday, February 1st, two weeks shy of her 96th birthday. She will rest beside her mom & best friend in the lovely Columbarium Garden at St. Francis By the Sea, on her beloved Hilton Head Island.

Sandy was born in NYC on February 16, 1926. She was the only child of John & Carmela Natale. She lived in Greenwich Village and relocated to Bergen County NJ as a child. She graduated from Hackensack High School and went into retail. While working in a dress store, Sandy was introduced to her future husband Richard by her would-be mother-in-law. Sandy & Richard married on April 14, 1951, and settled in Paramus NJ. They had an only daughter Diane, the following April 1952. Sadly, Richard passed away in January 1963 from injuries acquired during WWII. He was 36.

In 1978, Sandy & her mom, Millie, moved down south to Hilton Head Island, where the dynamic duo thrived! Sandy was a hair assistant, a dog walker, babysitter, theater usher, a key holder for Surf Court, and the social butterfly we all knew her to be. Sandy moved to Seabrook in 2016 where she enjoyed bingo, mahjong, and dinners with her retired friends. Sandy even earned her first award as ‘Seabrook’s Rocking Resident’ in its inaugural year! Sandy loved the ocean and walked the beach every day until she was unable to.

Sandy is survived by her beloved daughter; Diane Grieco of NJ, along with her; grandchildren Kari Butchyk & Nicholas Grieco; their spouses Kenneth & Victoria, and her beloved great-grandson, Mikah, all of NJ. Sandy also leaves behind her ‘adopted’ daughter Susan & her husband, Jim Henry of HHI, as well as her dear friend Jacqueline LaScala of Apex, NC. Sandy was preceded in death by her parents, John & Carmela Natale; her son-in-law Angelo Grieco; and her first cousins Pepe (Joseph), Steven & John LaScala.

In lieu of flowers, donations can be made in Sandy’s memory to St. Jude, and Hilton Head Animal Shelter. Island Funeral Home and Crematory of Hilton Head Island has been in charge of details. The disposition of her cremated remains will be private.