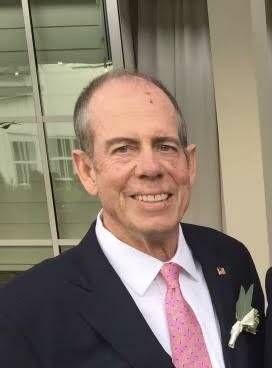 Jay was born on July 24, 1951, in Bronxville, NY to his parents, Arnold and Jane Conaty. He graduated from Johns Hopkins University in 1973 with a degree in History and was captain of the golf team. He married Nancy Lenihan in 1976. Jay enjoyed a successful career on Wall Street over several decades where he worked primarily in fixed income sales for Kidder, Peabody & Co. Jay and Nancy raised their son, Matt, in Rumson, NJ where Jay was also a member of the Borough Counsel. Following Jay’s retirement, he and Nancy moved to Hilton Head Island, SC in 2007.

Jay was a devoted husband, father, and grandfather. He will be remembered for his extraordinary wit and the endless laughter he brought to those around him.

Jay is survived by his wife, Nancy; his son and daughter-in-law, Matt and Holly of Lafayette, CA; his grandsons, Pierce and Patrick; and his sister, Brooke Farley of Old Greenwich, CT. He is preceded in death by his brother, Paul; and his parents, Arnold and Jane.

A memorial mass will be held at St. Francis by the Sea Catholic Church in Hilton Head Island, SC on March 25 at 10:00 a.m. In lieu of flowers, please donate to the National Kidney Foundation.