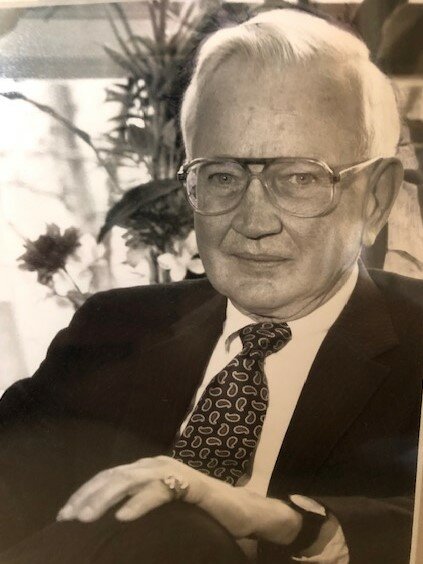 Born March 2nd, 1926, he served in the US Army from 1944-1946, graduated from Washington State University, class of 1950.  He was the Executive Vice President for the US Junior Committee of Commerce from 1958-1961, Treasurer of Hoffman LaRoche and retired as CFO of Brown Boveri Corporation in 1988.

After a whirlwind romance, he married Mary Joan Carlile,  they had 64 happy years together.  A devoted father to 3 sons, Lars (Kris), Joel (Maria), and Jon (Sue).  He is fondly remembered in Short Hills NJ, for his many years coaching youth baseball and football.  Moving to Hilton Head in 1989, he is remembered at Bear Creek Golf Club with an annual tournament.  All seven of his grandchildren, Will, Katy, Ben, Rose, Lars, Elizabeth and Lynn, remember him as a fun and indulgent grandfather, who was always willing to supply a parent-forbidden treat.

He is survived by beloved wife of 64 years Mary Swanson, his sons, daughters-in-law, and grandchildren.

The family wishes to thank his golfing buddies at Bear Creek for continuing to make him feel a part of the group; and special thanks to the wonderfully caring team from hospice and to his nurse Susie Oliver, who made his segue into death as peaceful and pain-free as possible.

A memorial service will be held July 16 at The Island Funeral Home at 11:00am.

Share Your Memory of
Ben
Upload Your Memory View All Memories
Be the first to upload a memory!
Share A Memory
Send Flowers
Plant a Tree