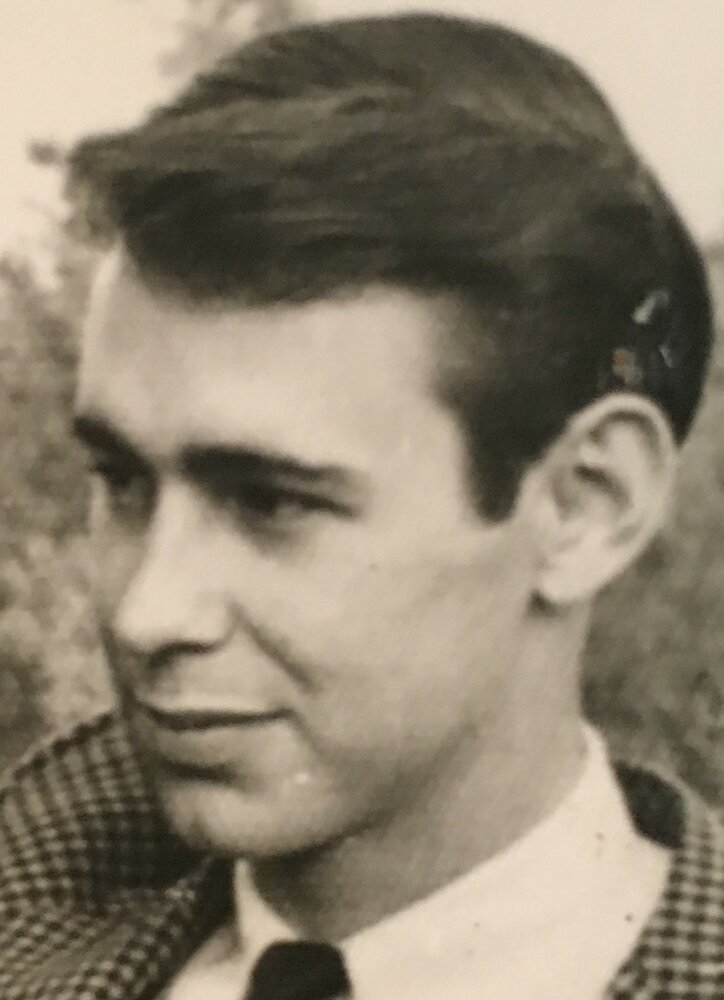 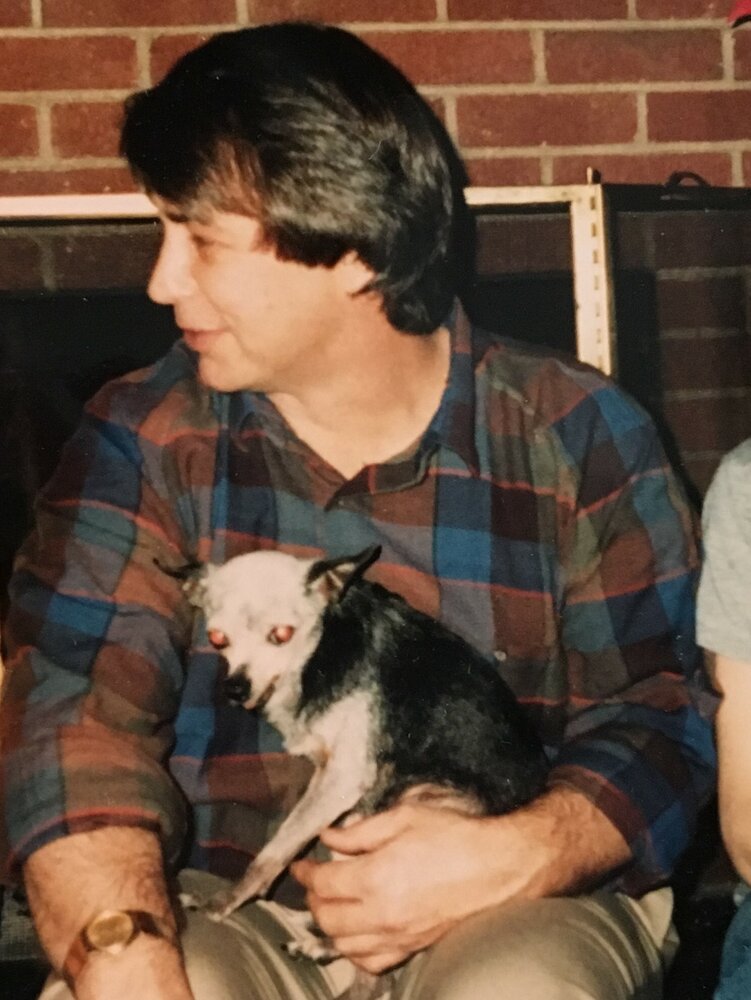 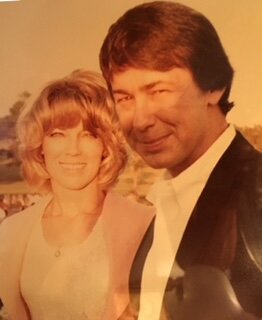 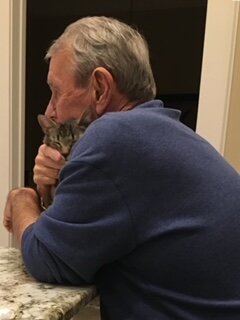 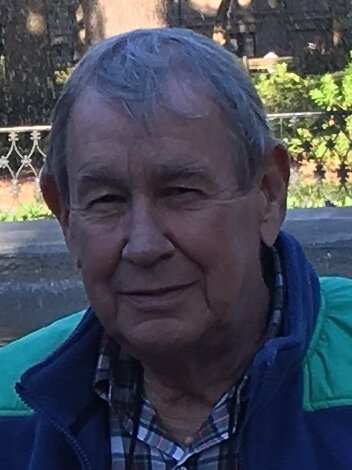 Forty years ago, by some amazing miracle, all the stars aligned just perfectly in Heaven to bring my beloved to me and me to him.   To fall so in love was unimaginable.  It was truly love at first sight.  In my dreams, he rode a great white horse as he raced to find me, galloping to sweep me off my feet, gathering me in his great strong arms in an eternal embrace.  If we had not found each other, I would never have known what it meant to be so utterly besotted by the love of a man.  It is with a shattered heart that I grieve the passing of this beautiful, brilliant, incredible man, the love of my life, Kirk Snyder.

Born with unlimited promise in Lexington Kentucky on July 16, 1944, Kirk was raised at Riverside Farm.  From birth, Veterinary Medicine was his destiny.  I asked him once when did he know he wanted to become a veterinarian.  He replied, “I was born a veterinarian.”  From a tender age, he cleaned the stalls, milked cows and fed the horses every day before going to school.  During foaling season, he night-watched the expectant mares so their foals would be born safely.  As a farm boy, he raised and tended multitudes of animals for 4H and for the farm.  He fulfilled the promise of a lifetime of caring for animals with a fully devoted heart and soul and unfailing love for all creatures.

As a boy, Kirk rode the railroad boxcars with the grooms and the race horses to Saratoga, NY, often being called on to show horses in the sales ring.  He said the owners liked to have him show horses that were for sale, because as a twelve year old, he made the horses look bigger.  As a man, he had a charming and captivating personality, and he was immensely lovable.  He looked as good in surgical scrubs as he did in a tuxedo.  He was an exquisitely handsome man.

Kirk had many pleasures and interests.  He was a natural athlete, being named All State and playing both offense and defense on his state champion runner-up football team in high school.  He was offered college football scholarships but turned them down, instead opting for study time to reach his professional goals.  Over time, he enjoyed boating in his boat “Loggerhead,” catch and release fishing, golf, snow skiing, swimming, water skiing, cruising, horse racing, art collecting, golf carting, and reading, fully absorbing such subjects as history, the Civil War, and anything related to animals, wildlife, and nature.   He once competed in an equestrian show jumping competition in Texas against the Army Pentathlon Team, having schooled his horse over the jumps in the dark of the night before.  He was an excellent handicapper at the race track, and, when golfing, he could putt with the pros.

Kirk was a graduate of the University of Kentucky College of Agriculture.  He earned his Doctor of Veterinary Medicine degree at Cornell University in Ithaca, NY in 1969.  He was a dedicated and eager student, absorbing volumes of knowledge and serving as the student head of large animal surgery and achieving many honors and awards, including the Cornell University Upjohn Award for Large Animal Clinical Medicine.  He was a brilliant equine surgeon and traveled to many race tracks to perform surgery on racehorses.  He owned and raced many horses, both individually and in partnerships.

Immensely honorable, generous, and kind, he was gifted with brilliance and a great heart.  In his forty-five years of practicing veterinary medicine, he was never daunted by a complicated medical or surgical case.  Rather, he welcomed the challenge of saving animals, even in the most desperate of circumstances.  In reaching a diagnosis and treatment, he said he always started thinking at the cellular level.  His immense knowledge, understanding, devotion, and ability put him at the top of his profession.

Caring for all creatures large and small, Kirk eventually built the Richmond Road Veterinary Clinic in Lexington, KY.  For years, he donated countless hours of medical and surgical care, as well as facility space, to feral cat rescue.  The welfare of animals was his abiding passion.  He took care of and treated the cruelty cases for the Lexington Humane Society for many years, often testifying in court against those who had hurt and abused animals.  In the courtroom, as in any difficult situation, he was always cool under fire.  Throwing bales of hay over fences to starving horses in the middle of subzero winter nights was an example of his compassion for animals suffering terribly from neglect and abuse.  If an animal was suffering and in need, he was compelled to help.  He never turned his back.

He had a generous and giving heart of gold, sometimes telling his clients that a box of their home grown tomatoes was all he needed to call things even.  He had an elderly client whose old cat was all the man had in the world.  The man always said, “Now Doc, I’m going to pay you when I can.”  To which Kirk would always reply, “Just send me a dollar a month.”

Kirk’s accumulations in life sometimes came in unusual ways.  He won a power boat in a poker game, and he once traded his veterinary services for a bull, his great bull “Junior.”  He was a member of the Keeneland Club at the Keeneland Race Course in Lexington, KY and a box holder at the track.  He was a member of the American Veterinary Medical Association (AVMA), Kentucky Veterinary Medical Association (KVMA), and he was licensed in Kentucky, South Carolina, North Carolina, Georgia, and Florida.  He was former veterinarian for the Iroquois hounds, and the national winner of the Catlow Award presented by the nationwide Masters of Foxhounds.

Retiring to Hilton Head Island, SC in 2014, Kirk loved life in the South Carolina Lowcountry.  He was the son of Marie Crutcher Snyder and Milton Kirkwood Snyder, Jr. of Lexington, KY.  He was a devoted and loving husband to his wife Carol and loving father to his two sons, Milt Snyder of Hebron, Kentucky and Scott Leslie of Lexington, Kentucky.  He loved his wife and sons dearly and took great pride in their accomplishments and great interest and pleasure in their happiness.  He will be dearly missed and forever deeply loved by his sons and his loving wife.  He was always there for all of us, arms around us, larger than life, a tower of strength, a self-assured, confident, take charge person, a strong, indomitable, and spectacular man.  We are just heartbroken by this immeasurable loss.

Kirk’s family wishes to extend special thanks and deepest gratitude to:  Dr. Patty Shapiro, an exceptional, kind, beautiful, and stunning person, who is an exquisite friend and the brightest star on a dark night;  Dr. Van Gauby for his excellent care, devoted interest, and great heart;  Dr. George Negrea for his incredible kindness;  Cassie Beard, RN, for her compassion, nursing skills, and kindness;  Dr. Chris Walker for his kindness and support;  Hilton Head Hospital;  and the Island Funeral Home for their services, guidance, and kindness.  A Gathering of Remembrance will be held at a later date.

Kirk Snyder led a wildly exciting, passionate, and worthy life.  He had an edge and a fire that made him thrilling.  He was a magnificent veterinarian and an extraordinary man.  Rest always in eternal peace.  My arms are always around you.

Share Your Memory of
Kirk
Upload Your Memory View All Memories
Be the first to upload a memory!
Share A Memory
Plant a Tree