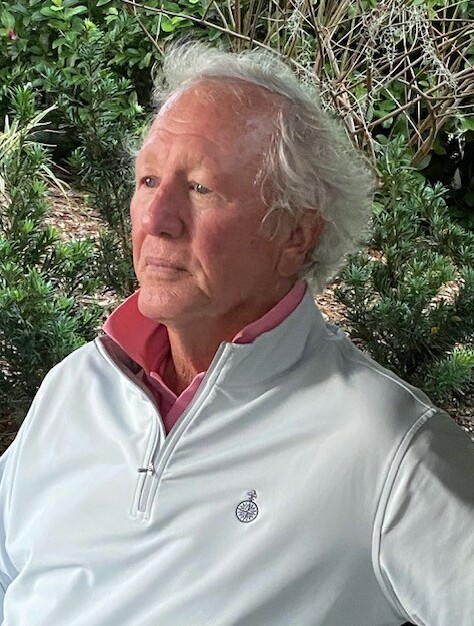 Peter was born November 16, 1945, in Bryn Mawr, Pennsylvania. He is predeceased by his parents, Ardis Flick Parrott and Perry McCallum Parrott, Sr.

He grew up in Greenville, South Carolina, attended The Baylor School in Chattanooga, Tennessee, then graduated from Davidson College with a Bachelor of Arts in English. Peter and Lynn were married in 1967, prior to his attending graduate school at Clemson University where he received a Master’s degree in Industrial Management.

After college, Peter joined his father’s textile dyeing and finishing company, Parrott and Ballentine. His career was interrupted by service to his country as a Lieutenant in the United States Army, including a tour of duty in Vietnam. He was awarded the Bronze Star, the Army Commendation Medal, and the Republic of Vietnam Service Medal for his military service. He returned to Parrott and Ballentine, then joined the Sea Pines Company, first at Big Canoe near Atlanta. In 1973, Peter and Lynn, with their two young sons, moved to Hilton Head Island where he was one of the early real estate associates for Sea Pines Plantation. Following a successful tenure with Sea Pines, and as a development partner of Twin Oaks, Peter was hired by Trammell Crow Residential and became a partner, based in Tennessee. The family returned to Hilton Head Island and Peter founded the University Housing Group, which developed student housing in college locations throughout the southeast.

Peter always enjoyed the game of tennis and has played on the Davidson College team while there. He also loved fishing with his sons, boating, and golfing.

Wherever the family lived, Peter was deeply involved in community philanthropy. He served on the Board of Directors of the Governor’s School for the Arts and Humanities and was appointed to the South Carolina Board of Education, representing the Governor’s School. While a member of the South Carolina Yacht Club, Peter was awarded the prestigious Galbraith Humanitarian Award for his tireless work for Volunteers in Medicine. He orchestrated very successful fundraisers for VIM and served on its Board of Directors for many years. The Eckedahl-Parrott Award was established at VIM in honor of the two major supporters.

Peter is survived by Lynn, his loving wife of 56 years; his son Perry McCallum Parrott III, his wife Anna Willis Parrott and sons Andrew and Sheppard of Delray Beach, Florida; son Walker Brownell Parrott and his su amante Debs of Pisgah Forest, North Carolina. He also is survived by a sister; Ardis Parrott Albany of Birmingham, Alabama; a brother, John Flick Parrott, and his wife Sally Fowler Parrott of Greenville, South Carolina. Peter was loved by his entire extended family.

A graveside service is planned for family and friends on Thursday, October 27, at 11 AM at Six Oaks Cemetery in Sea Pines, with a gathering to follow at noon at the Sea Pines Country Club to toast a life well lived.

Share Your Memory of
Peter
Upload Your Memory View All Memories
Be the first to upload a memory!
Share A Memory
Send Flowers
Plant a Tree