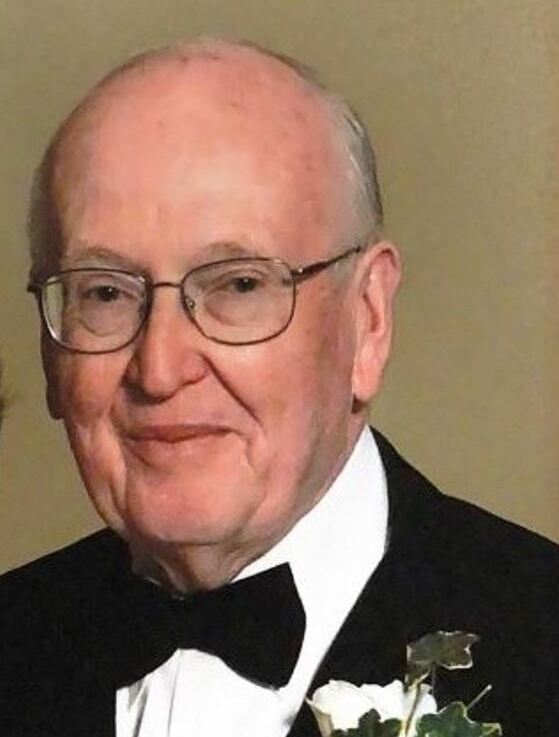 Mr. George Flory Hall, Jr. died peacefully on December 8, 2022, at Hilton Head Hospital surrounded by family.  He was born in York, PA on February 7, 1936, to George Flory Hall, Sr., and Helen Owens Hall.  He is survived by his wife Sara Truluck Hall, Sara’s daughters, Laura Martin (Andy) and Betsy Howard (Scott), four grandchildren (Grant and Reed Martin, Will and Robert Howard), his brother Robert E. Hall and wife Elizabeth, as well as a sister-in-law Maureen Brooks, a niece Lori Porrini and her husband Frank, a nephew, Michael Hall, and numerous nephews and cousins.

The family moved to the Philadelphia, PA area in 1941. George spent most of his working career with the Philadelphia National Bank that later became CoreStates Financial Corp as it grew significantly through mergers and diversification.

At the time of George’s retirement in 1994, he was an Executive Vice President of CoreStates with responsibility for the company’s domestic and international operations with staff and offices worldwide.  It was then he moved full-time to Hilton Head and continued to work and travel throughout America for another five years as an independent consultant with a specialty of working with banks and technology companies on mergers, consolidation/integration, and operational improvements.

During his retirement he served on the board for many years and for three years as president of the property owner’s association at both of the golf club communities where he resided: the Elk River Club in Banner Elk, NC, and the Colleton River Plantation Club in Bluffton, SC.

During his life, he dearly loved his wife, Sara, whom he married in 2009, and his first wife, Geraldine of 46 years, who died in 2006.  He enjoyed his many friends from where he worked and lived.  He also enjoyed golf as an average player which is a generous evaluation, as well as the stock market and investing.  He loved golf cart rides with his family, either watching the sunset on the 18th green with his niece or golf ball hunting with his grandsons.

He was a devout Christian who found his church and various Bible study groups he participated in a blessing, joy, and a relief from the everyday problems of the world.

George was preceded in death by his first wife, Gerri, his parents, a brother-in-law, Bob, and a nephew, John.

In lieu of flowers, donations may be sent to All Saints Episcopal Church, 3001 Meeting Street, Hilton Head, SC  29926, or a charity of your choice.