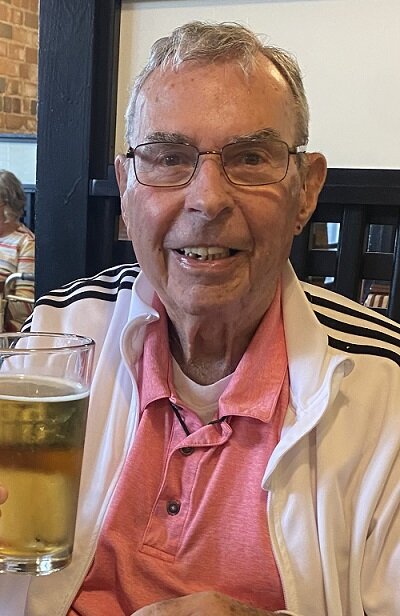 It is with great sadness that we announce the passing of our father, Russell Lee DeLand, 95, on December 20, 2022, on Hilton Head Island, SC.

His story began when he was born to Charles Lloyd and Ila Miers DeLand in Lansing, MI on January 17, 1927. He grew up and graduated high school in Charlotte, MI. Russ served with the Army Air Force (1944-1946) and was stationed in Japan as a radio operator. He attended Michigan State University following his time in the service.

Russ spent his career working as a State Farm Insurance agent for 36 years in Battle Creek, Mi. He was very social and loved his job because he enjoyed people. He was active in his community and served in leadership roles including President of the BC Jaycees, President of the Exchange Club, and President of the Junior Chamber of Commerce. Since his retirement in 1996, Russ and Ailene lived the good life at their home in Bradenton, FL.

All of his life, Russ has enjoyed sports including running track, playing tennis and bowling. His greatest love was golf, which he played through the age of 90. He was proud to have hit two Hole in Ones. Russ could also be seen at the card table playing Bridge, Pinochle, Euchre and Mexican Train. He never showed mercy to any of his daughters when it came to a game of Pinochle!

Russ was the sweetest man, who adored his family. Anyone who knew him, couldn’t help but love him! Russ was described by many as a true gentleman. He always had a ready smile and demonstrated his concern for others.

Our father taught us that real men cook and it’s ok to put lots of butter on anything. He liked nothing better than enjoying a beer, deep fried mushrooms, and an olive burger at Barney’s with His Girls!

Arrangements are being handled by Island Funeral Home of Hilton Head Island. Russ will be laid to rest at the Fort Custer National Cemetery in Battle Creek, MI alongside his wife, Ailene with services at a later date. islandfuneralhome.com

We will try not to cry too much because he is gone but instead be happy that he was here. What a gift to have had him as our father.  He left us with a heart full of memories.  Take a bow Dad!  You did it right!

Share Your Memory of
Russell "Russ"
Upload Your Memory View All Memories
Be the first to upload a memory!
Share A Memory
Send Flowers
Plant a Tree