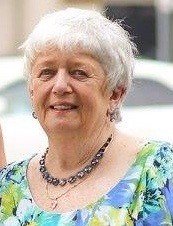 Joan Mehaffey Heller of Hilton Head Island died peacefully at the age of 81 on September 29, 2019.

Joan was born in Union City, NJ to Stella Guider Mehaffey and Robert Mehaffey.  She attended Hackensack High School and was a graduate of The Katharine Gibbs School.  She was employed as a director for the Christ Episcopal Church in Suffern, NY.

Joan married Paul Heller on April 11, 1959, settling in Sloatsburg, NY.  They retired to Hilton Head Island in 2003.  She is survived by Paul and her children Lorraine (Steven) of Waterloo, NY, Nancy (Richard) of Huguenot, NY, Thomas (Nancy) of Mahwah, NJ, and Patricia (Timothy) of East Northport, NY.  She had nine grandchildren-Sarah, Chelsea, Emily, Christopher, Carly, Margaret, Henry, Timothy, and John, and one great grandchild, Ashton.  Joan was preceded in death by her parents and her sister Carol.

Joan was a member of the Port Royal Country Club where she spent many hours playing golf and bridge.  She was also very active in the Mahjongg and Bunco groups of Hilton Head Plantation.

Visitation will be held on Thursday, October 3 from 10-12 at The Island Funeral Home & Crematory.

A Mass of Christian Burial will be celebrated on Saturday, December 28, 2019 at 2:30 pm at St. Francis by the Sea Catholic Church.

In lieu of flowers, the family requests donations in Joan’s name to Hospice Care of the LowCountry, PO Box 3827, Bluffton, SC 29910.