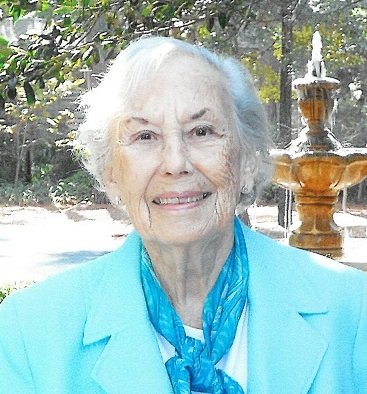 Jinny was born April 24, 1920 in St. Louis to Virginia Cora Rhodes and John McMaster Cook. She attended schools in St. Louis, and graduated from Washington University, where she was a member of Kappa Alpha Theta sorority, with a degree in Education.

She taught second grade for two years, then trained at the outset of World War II to become an air traffic controller. During the war Jinny worked under the FAA in control towers both in Hutchinson, Kansas and at Lambert Field in St. Louis.

The family also traveled extensively, travel being a lifelong passion and interest of Jinny’s. They drove through Great Britain, Europe, and throughout countries behind the Iron Curtain, frequently taking the children with them. As a result of these experiences she became a travel agent, which she enjoyed for seven years.

In 1977 she and her husband moved to Sea Pines. There she was a member of the Herb Society, Hilton Head Garden Club, Sea Pines Golf Club – to name a few of her activities. Jinny also was a longtime member of First Presbyterian Church where she volunteered extensively, as well as Deep Well, and Volunteers in Medicine. She also enjoyed volunteering at several Heritage Classic golf tournaments.

In 1993 their son, Tom, died. Later, in 1997 they also lost their daughter, Nancy. They moved to The Seabrook shortly thereafter. In the year 2000 her husband, Charles, passed away.

While living at The Seabrook she was on the Regime Board 1, the Endowment Committee, and the Decorating Committee.

From the late 1920s until virtually the end of her life Jinny joined an ever-changing and growing list of family members at their beloved gathering place at the Congregational Summer Assembly near Frankfort, Michigan nearly every summer. As a child she spent unforgettable, entire summers there with her grandmother, parents, and three siblings, in the case of the latter – all of whom continued into their 90s.

She leaves a large extended family although she was predeceased by her brother John McMaster Cook, Jr, and her sister Jennette C. Jones, both of whom left children and grandchildren. She is survived by her brother Alan R. Cook of Overland Park, KS. In addition, she leaves grandsons Matthew Rooks and family and Adam Rooks. She also leaves Ed and Les Leutwiler and their families, Georgia Leutwiler, Jim Leutwiler and Linda Leutwiler Kirchner and her family. Also, she leaves the sons and their families of her dear friend Richard Lincoln, who predeceased her.

Remembrances should go to the Endowment Fund of the Seabrook.

Share Your Memory of
Virginia
Upload Your Memory View All Memories
Be the first to upload a memory!
Share A Memory
Send Flowers