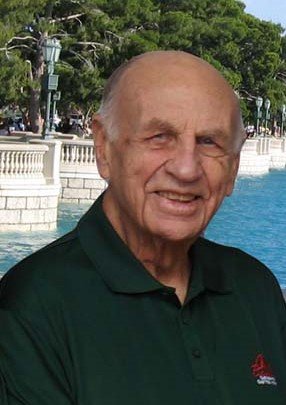 It is with great sadness that the family of Sal Basirico announces his passing on Saturday,

November 23, 2019, at the age of 99 after a brief illness. Sal was born on October 31, 1920 to Antonino and Margherita Basirico.  He will now be rejoining the love of his life of 48 years, Cora, who passed away 25 years ago. Sal will be lovingly remembered by his daughters Joan (Daniel), Barbara (Robert) and son Richard (Karen), along with 8 grandchildren and 10 great-grandchildren. He was born in and graduated from Boys’ High School. Sal continued his education at The Military College of the South, The Citadel. He then entered the U.S. Army and served in World War II throughout The European Theatre. After serving his Country, he furthered his education and earned an MBA in Finance from .  Sal’s Wall Street career included numerous years as Treasurer and Controller at Frank B. Hall & Co., Inc. and Harcourt Brace.

Sal and his wife, Cora, retired to in 1985 and spent many enjoyable years at The Long Cove Club. After Cora’s passing, he moved to The Cypress.  Sal was happiest surrounded by his family and friends.

The Basirico Family would like to thank his caregivers at The Cypress, , and Hospice Care of the Lowcountry for their kind and compassionate care of our Dad over the past months.

In lieu of flowers, Sal requested donations to be made to Coach Basirico’s Scholarship Fund, c/o or The Hilton Head Humane Association.

Share Your Memory of
Salvo
Upload Your Memory View All Memories
Be the first to upload a memory!
Share A Memory
Plant a Tree