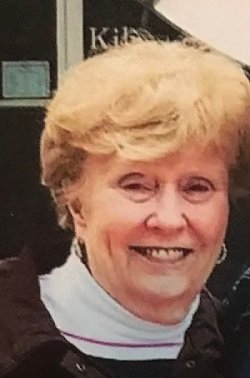 Karen Elaine Dembiec, 78, of Hilton Head Island, SC (formerly of Westfield, NJ) passed away peacefully on Friday, January 17, 2020, surrounded by her family. Karen was born and raised in Westfield, NJ with her sister Judy (Nelson) Johnson and brother Tom Nelson. Following graduation, Karen accepted a position with AT&T and later worked for the Westfield School system serving as the Secretary to the Principal of Westfield High School. Karen married Walt Dembiec in April 1963, and they were happily married for 55 years before Walt passed away after a lengthy battle with Parkinson’s Disease. Karen and Walt raised four children in Westfield, NJ where Karen enjoyed spending time with friends as a charter member of the initial chapter of the “Co-Weds” group in the Presbyterian Church of Westfield, hosting a Christmas Boutique in her home each Holiday season and spending every weekend attending all of her children’s baseball, football, basketball and soccer games. In 1996, Karen and Walt relocated to Hilton Head Island, SC where Karen loved socializing with friends, playing bridge and mahjong and getting together for the ladies’ monthly birthday lunches. As Walt’s disease progressed, Karen devoted much of her time serving as his primary caregiver and, along those lines, helped found the inaugural affiliate of Rock Steady Kick-Boxing and Mixed Martial Arts (MMA) for Parkinson's patients at Riptide Gym in Bluffton, SC, a program that has now expanded and is still helping Parkinson’s patients and families in the greater Hilton Head community. Known best for her loving and caring heart, great sense of humor and humility, Karen was the center of her extended family. Karen was predeceased by her father, Iver A. Nelson and her mother Norma (Kirby) Nelson. She is survived by her four adult children, Walter Dembiec, Jr. of Westfield, NJ, Jeffrey Dembiec of Scotch Plains, NJ, Christopher Dembiec of Las Flores, CA and Jamie Mitchell of Seneca, SC and multiple grandchildren, nieces and nephews. Funeral Services will be held on Saturday, January 25, 2020 at 2:00 pm at Providence Presbyterian Church, 171 Cordillo Parkway, Hilton Head Island, SC, 29926. In lieu of flowers, donations can be made to the American Cancer Society.

Share Your Memory of
Karen
Upload Your Memory View All Memories
Be the first to upload a memory!
Share A Memory
Send Flowers