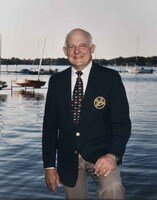 Obituary of Robert A. Puckey

May 11, 1935 - October 5, 2021 Hilton Head Island, South Carolina - Robert A. Puckey, 86 of Hilton Head Island, SC. Born May 11,1935. Died at home Oct. 05, 2021 in the presence of Dolores Puckey, his bride and childhood sweetheart of 70 years. He was a journeyman electrician before graduating University of Michigan in the field of Accounting. Bob worked for Ernst & Ernst before establishing his own CPA practice in Jackson, MI. An active citizen in Jackson, Bob served on the boards of the Ella Sharp Museum, the Jackson Chamber of Commerce, Arbor Hills Country Club, and Country Club of Jackson. A longtime member of Clarklake Yacht club, he served as it's Commodore in 1994. He spent countless enjoyable hours in his barn working on classic cars, tractors, bulldozers or concocting clever tools to make a job easier. Many wonderful life conversations happened in that barn. He was known for his brilliant sense of humor and lively personality. His favorite role however was that of our father and grandfather (Papa or Papa Bob). Whether taking art classes with a grandchild, sneaking us off to get ice cream, or playing devil's advocate in a debate to make us think, he never failed to be involved in our lives. At his retirement party, he famously said: "My family from oldest to the youngest are good people and raising good people to be good to other people is success." After years of visiting, Bob and Dolores moved part-time to Hilton Head Island in 1998 to spend time with their youngest grandchildren, eventually settling permanently in 2014. On Hilton Head, he was a member of First Presbyterian Church, a volunteer with Hilton Head Heroes, and a regular fixture at his garden in Sea Pines' Heritage Farm. He is predeceased by brother Thomas Puckey, and grandsons Anthony (Tony) Puckey and Thomas (Tommy) Conway. Bob is survived by his wife Dolores Puckey, his sister Janet Buchannan of Columbia SC, his four children, Cherie Evans (Dan) of Jackson, MI, Tim Puckey (Linda) of Williamston, MI, Dennis Puckey of Hilton Head Island, SC, and Beth Dunigan (Dan) of New Baltimore, MI, his eight remaining grandchildren Danielle Spencer (Chris), Jessica Maitland (David), Whitney Newhouse (Chas), Adam Evans (Ashlee), Erin Crenshaw (Josh), Andrew Conway, Jackson Puckey, and Davis Puckey, and his 18 great grandchildren, Emily, Maggie, Lucy, Kate, Bethany, Jack, Alice and Daphne Spencer, David, Max, Barrett, Jovi, Piper and Eva Maitland, Noah Newhouse, Jude and Cash Evans,and Jamison Crenshaw who adored him and lit up whenever he walked into the room. A Celebration of Life will be held in Hilton Head Island on November 6 at 11:00 at First Presbyterian Church on Hilton Head Island. In lieu of flowers, please donate to Hospice Care of the Lowcountry.