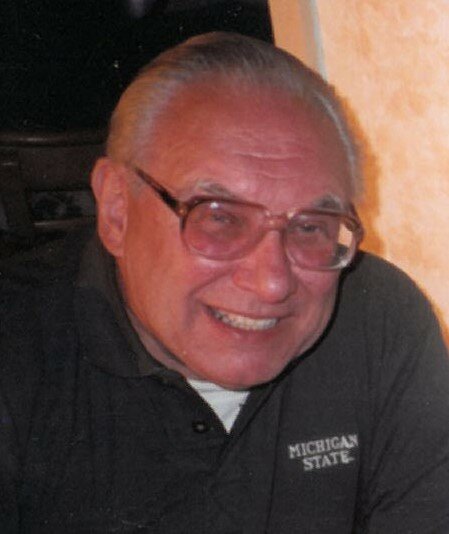 Edwin Clark Houldsworth of Hilton Head Island passed away on Wednesday, November 17, 2021.  Born on May 10, 1933, in St. Catharine’s, Ontario, Canada to Paul and Margueritte Houldsworth, he was the eldest of three sons (Keith & Lee).

Ed graduated from Battle Creek Central High School in 1951 where he was a member of the track and cross-country teams, participated in his Junior and Senior plays, and served as the sports editor of the school newspaper. Ed attended the Michigan State University (class of 1955) where he continued running cross-county and was a member of the Sigma Nu fraternity. Next stop was the U S Army and then on to Wayne State University Law school. His law career spanned multiple decades, ending with the Federal Deposit Insurance Corporation where he served 25 years as senior counsel.

Ed spent his retirement in Hilton Head, South Carolina, providing his grandchildren with a love of the ocean waves and the thrill of catching green anoles. The little lizards were not the only green to be found at his house which featured a Michigan State flag flying in the breeze. Ed passionately followed his beloved Spartans through football and basketball season. He also had a love for researching different subjects. It is safe to say that Ed did not care much for the internet but was old school relying on print magazines and newspapers. If he knew you had a special interest, you could expect to receive an envelope full of clipped articles on that subject with key points underlined.

Ed is survived by Alice, his loving and dedicated wife of 24 years, his son Scott (Lisa), and his three grandsons, Mitchell, Colton, and Bryce. A special thank you to the people at Caris Healthcare for their support during his final days.

Share Your Memory of
Edwin
Upload Your Memory View All Memories
Be the first to upload a memory!
Share A Memory
Send Flowers
Plant a Tree