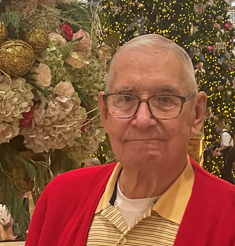 Dick graduated from The Ohio State University with a B.S. degree in business and a Juris Doctor degree from the Ohio State Moritz College of Law and was a member of Sigma Nu fraternity. He was honorably discharged from the US Army before beginning his business career. He worked in public accounting for two national firms, was an Ohio Assistant Attorney General under William B. Saxbe, and practiced private law before going into corporate tax law. He retired from Pharmacia, Inc as Director of Taxes and Insurance.

He was married to Pamela Sue Gerald in 1963 until her death in 2012. Upon his retirement, he and Pam moved to Hilton Head Island, South Carolina in 1999.

He was also preceded in death by his parents; Harry Wilmer and Cornelia Helen (Amon) Gregg; his brother Jack Wilmer Gregg. He is survived by his sister; Betty E Good of Phoenix, Arizona; his daughter and son-in-law, Jodi Renee (Gregg) Krivda and Scott Krivda of Hilton Head; his son and daughter-in-law John Robert and Jana Jensen Gregg of Grand Rapids, Michigan; his three granddaughters, Allison Maria Krivda of Hilton Head, Maren Elizabeth Gregg and Robin Grace Gregg of Grand Rapids; his brother-in-law Galen Thompson of Boca Raton, Florida. and numerous nieces and nephews and extended family in Ohio, Michigan, and Arizona.