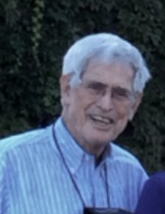 William “Bill” Huey passed away peacefully on February 23 at the age of 91.

Bill was born on May 24, 1930, in Swarthmore, Pennsylvania to his parents William and Edith Huey. He spent his formative years there, graduating from Swarthmore High School in 1948 where he was Captain of the basketball team, quarterback of the football team, and played lacrosse & baseball.

He graduated from Middlebury College, where his older sisters Beth and Jean also attended, in 1952. He was a political science major and was a member of the Delta Upsilon fraternity following in his dad’s footsteps who had been a DU at Swarthmore College.

Bill attended Law School at Michigan University graduating in 1955. Shortly following graduation, Bill met Ellen Colyer from King of Prussia. After 6 dates he proposed and they were married on February 4, 1956, and were together until Ellen’s passing on July 6, 2003.

After a deferment allowing him to attend law school, Bill enlisted in the US Navy Officer Candidate School in Newport, RI in February. Following his marriage, he completed his training at the Newport Justice School to be a line officer with a specialty as a legal officer. In April, he was deployed as an ensign/legal officer on the USS Thetis Bay aircraft carrier, the first US helicopter assault carrier. Bill was deployed for 6 months to Japan for training operations. Following this stint, he and the family returned to King of Prussia where Bill served at the US Air Station in Patuxent, Maryland as an Asst. Legal Officer. His time in the service ended in 1958.

That year Bill passed the Pennsylvania bar but decided not to practice law. He began his career in the life insurance industry at Provident Mutual in Philadelphia. In 1962 Bill was recruited by Indianapolis-based Research & Review Company (R & R), an insurance publishing company. In 1972, Bill became President of R & R which was acquired by ITT. In 1974 Bill made the decision to leave corporate life and become an independent agent for Great-West Life Insurance as an expert on business planning and pension plans. He was an ongoing member of the Million Dollar Roundtable and a noted speaker at major insurance conferences. Bill retired in 2000 at 70 years old to enjoy life in Hilton Head.

Bill was the patriarch of a loving family. He is survived by his devoted wife, Suzanne W. Huey whom he married in September 2006; his daughter and son-in-law, Carolyn and Jim Meister of Amelia Island, Florida; daughter and son-in-law; Jennifer and John Rulli of Carmel, Indiana; older Sister Jean Huey; five loving grandkids; Granddaughter and grandson-in-law Ashley and Josh Hash, William A. Wick III, Michael Rulli, Jonathan Rulli, and Ellen Vanagel; and two great-grandaughters, Vivienne and Mercer Hash. Stepchildren Bob Tompson; Stepson and daughter in law; Richard and Yogi Tompson; and stepson and daughter in law, Rett and Angela Tompson.