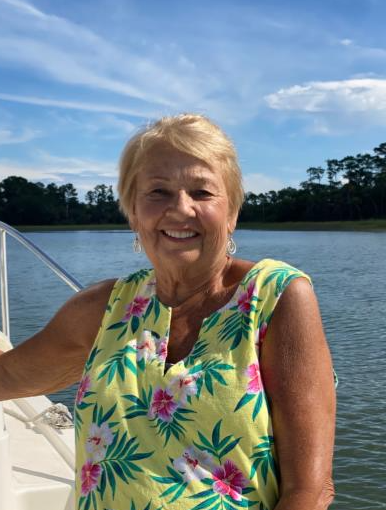 Frances Lawrence Viverette of Hilton Head Island, SC, passed away at her home on August 3rd, 2022. Frances was born on December 13th, 1944, in Durham, NC to the late Telphor Hinton Lawrence Jr., and Frances Long Lawrence.

Frances was a graduate of Durham High School and Croft Business College where she was a member of Beta Sigma Phi Sorority and Women in Construction. The friendships she made during her years in Durham continued until her death.

Frances married the love of her life, the late Cecil Exum Viverette Jr. in 1965. They were married at Duke Memorial Methodist Church, where Frances was an active member. That same year, Frances and Cecil moved to Bowling Green; VA. Frances was very active in the community. She was president of the Ladies Auxiliary to the Bowling Green Fire Department, vice-president of the Caroline County Junior Women’s Club, and served in various capacities with Bowling Green Methodist Church, where she also was a choir member.

She and Cecil moved to Fredericksburg, Virginia where they lived until his retirement. They were members of Fredericksburg Methodist Church. During this time, Frances began to play golf and tennis, both of which became lifelong hobbies.

Frances and Cecil moved to Hilton Head Island in 2004. Frances was active in the community on the island, and loved being involved with numerous clubs, and playing golf and tennis. She and Cecil also enjoyed volunteering and supporting Hilton Head Heroes and being a member of First Presbyterian Church. Frances loved being on the island and spending time out on the water with Cecil. She prioritized her children and grandchildren, continuously traveling to North Carolina and Virginia to attend their numerous activities throughout the years.

Frances was a loving wife, mother, and grandmother, who loved spending time with her family more than anything. She is preceded in death by her husband Cecil; and her brother Ted Lawrence. Frances is survived by a daughter, Mandy Willis (Mark) of Chester, VA; son, Tripp Viverette (Jennifer) of Maiden, NC; and grandchildren, Timothy Willis, Robert Willis, Mary Elizabeth Willis, Mack Viverette, Emerson Viverette, and Georgia Viverette.

The visitation to receive family and friends will be on Wednesday, August 10th, at the Island funeral Home on Hilton Head from 5:00 p.m. to 7:00 p.m.

The celebration of life service will be Thursday, August 11th, at First Presbyterian Church on Hilton Head Island at 2:00 p.m., followed by a reception at the Yacht Club of Hilton Head. All are welcome to attend and celebrate France’s life. In lieu of flowers, donations to the Jimmy V. Foundation to support cancer research would be greatly appreciated.

A Celebration of Life

Share Your Memory of
Frances
Upload Your Memory View All Memories
Be the first to upload a memory!
Share A Memory
Send Flowers
Plant a Tree