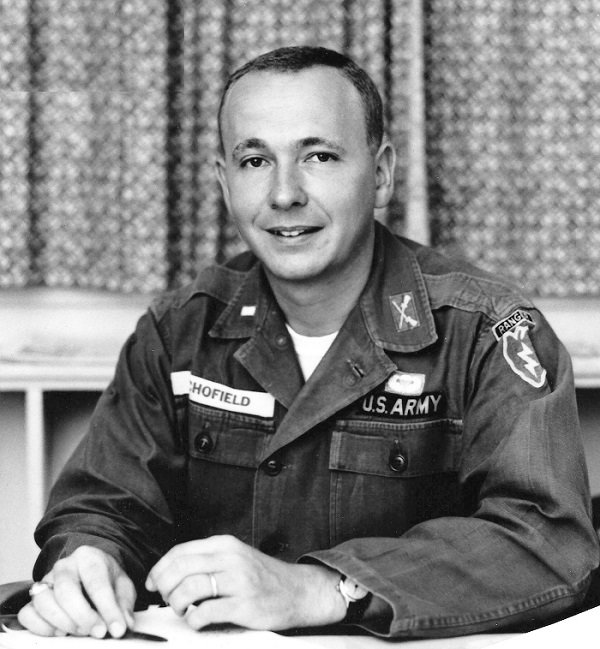 LTC (Ret.) David Gibson Schofield, age 85, passed away with his loving wife by his side on Friday, March 22, 2019, at his home on Hilton Head Island, SC, where he has lived for the past 18 years.

David, born June 22, 1933 in Newton, MA, the son of Robert and Isabell Schofield and the grandson of Dr. and Mrs. Otho Schofield of Wellesley, MA, was raised in Wellesley and attended public schools there until his high school sophomore year.  He graduated from Bordentown Military Institute in NJ and continued his education at The Citadel: The Military College of South Carolina, where upon graduation in 1956, he was commissioned 2nd Lieutenant in the US Army.  Colonel Schofield later graduated from the Army Infantry, Armor, Airborne and Ranger Schools, as well as the Army Command and General Staff College. He also attended Boston University, where he earned a Masters of Education degree.

Colonel Schofield’s military service included command and staff assignments in the infantry and intelligence services.  That service included two tours in Vietnam, one with the 11th Vietnamese Ranger Battalion and another with the 1st Cavalry Division.  Other assignments included Hawaii with the 14th Infantry Regiment, Germany with the Army Special Security Group and other US postings. His military awards included three Bronze Star Medals, the Air Medal, 2 Meritorious Service Medals and two Joint Service Commendation Medals.  His most cherished award was that of the Combat Infantry Badge presented to him by his senior Sergeant following ground action in Ashau Valley in Vietnam.  Colonel Schofield retired from the Army in 1976.

After leaving military service he spent 14 years in private industry with the Nuclear Surveillance and Auditing Corporation (NUSAC) of Reston, VA (later acquired by Wackenhut Corp) where he rose from Associate Consultant to Executive Vice President.  Upon departure from NUSAC, David formed his own company, Safeguard Applications International and provided security consulting services to the nuclear industry, the Department of Energy and the National Laboratories until his retirement in 2000.

While stationed at Fort Devens MA, he met and married Betsy Harris of Wellesley, MA in 1958. Together they traveled far and wide to military assignments in Hawaii, Kansas, Kentucky, Virginia Beach, Germany, and finally retirement in Fairfax County, VA.  Dave and Betsy shared a mutual passion for supporting grass roots political candidates at the county/state level and could always be found serving out sets of mixed and men’s doubles tennis.  He found faith and fellowship at Vienna Presbyterian Church.  Following a courageous battle with a recurrence of cancer, Betsy passed in 1999.

David later married Pamela Saunders Davis of Herndon, VA and together they relocated to Hilton Head Island, SC where they enjoyed retired life in the Carolina Lowcountry with tennis, boating, community service activities and adventures traveling the world including Asia, South America, Australia, Europe, North America and Africa.  In recent years Dave and Pam were active in local organizations, notably the Arts Center of Carolina, the SC Repertory Theater and the Lean Ensemble Theater.  He was also an active member of the Country Club of Hilton Head, The Heritage Library of Hilton Head, as well as the Property Owners Association of Ribaut Island.  He found great solace and inspiration in the First Presbyterian Church where he and Pam have been long time members.

In lieu of flowers, donations may be made to Hospice Care of the Lowcountry (P.O. Box 3827, Bluffton, SC 29910) or First Presbyterian Church of Hilton Head Memorial Receptions Committee (540 William Hilton Parkway, HHI, SC 29928.)

Arrangements by The Island Funeral Home and Crematory. Islandfuneralhome.com